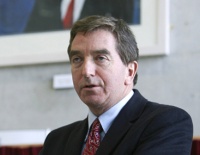 Niall FitzGerald is an Irish businessman. (Born 13 September 1945). He spent over 30 years of his career with Unilever in Ireland, the Netherlands, South Africa, the USA and the UK, and was its chairman and CEO from 1996 until 2004.

Fitzgerald also served on the board of business intelligence agency Hakluyt & Company as chairman between 2008 and 2013. [1] He has sat on Hakluyt's supervisory board since July 2013.

Mention in the House of Commons

When Norman Baker brought the House of Commons' attention to Hakluyt in 2010, Fitzgerald was one of the names mentioned as well as Kieran Prendergast, Keith Craig, Sir Rod Eddington, Robert Webb QC and Mark Getty.[3]