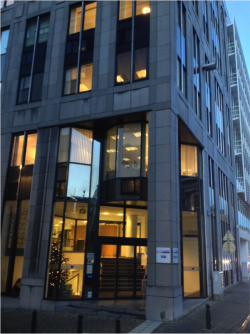 Trans Atlantic Business Dialogue is a peak business association made up of high level corporate executives from the US and EU countries. TABD is a very effective and powerful player in US/EU policy discussions.

The TABD's goal is to help establish a barrier free transatlantic market which will serve as a catalyst for global trade liberalisation and prosperity. Unified markets are needed to create a business environment which will stimulate innovation and economic growth, more investment and create new jobs.[1]

The TABD is one of the world's most powerful unelected bodies - 'unique because of the personal involvement of CEOs (chief executive officers) working closely with the highest levels of government from the EU and the US. It is not an organisation, but a framework drawing on the resources of existing companies and associations.' This 'process' involves 100 of the West's most influential CEOs divided into 40 issue groups which comprise one EU CEO paired with a US counterpart. For example, Monsanto's Robert Harness and Unilever's Huib Vigeveno are responsible for agri-business. The EU and US both assign a senior government official to each pair to facilitate discussions. The TABD meets twice a year - a CEO Conference in the autumn which produces a list of recommendations, the 'implementation table', and a Mid Year Meeting in May when officials feedback on progress, and produce a report which is submitted to the US President and EU Commission President, along with a new table. These include agenda items for the World Trade Organisation (WTO), the supra- national body which governs international trade relations. High on the agenda is implementation of an agreement to protect foreign investment - a resurrection of the ill-fated Multilateral Agreement on Investment (MAI) which failed to materialise from secret negotiations conducted in the Organisation for Economic Cooperation and Development (OECD), between 1995-98. The Products Liability Group is promoting a measure which restricts the right of citizens to sue corporations for negligence such as the Exxon Valdez oil spill. Several of the issue groups seek to extend Mutual Recognition Agreement (MRA) measures - the 'approved once, accepted everywhere' principle. This dispenses with individual nations' rights to adopt their own regulations - on health and safety for example. If the US government or WHO Codex Alimentarius committee approves Monsanto's bovine growth hormone (rGBH) or genetically modified seeds, then other countries cannot ban their use despite concerns about the possible effect on health and the environment. The Transatlantic Business Dialogue (TABD) offers an effective framework for enhanced cooperation between the transatlantic business community and the governments of the European Union (EU) and United States (US). It is an informal process whereby European and American companies and business associations develop joint EU-US trade policy recommendations, working together with the European Commission and US Administration. The Objective The aim of the TABD is to boost transatlantic trade and investment opportunities through the removal of costly inefficiencies caused by excessive regulation, duplication and differences in the EU and US regulatory systems and procedures. Additionally, the TABD works to identify areas where the US and the EU could enhance cooperation in meeting the challenges of the global marketplace.

The Origins In November 1995 the TABD was launched in Seville, Spain at a conference attended by CEOs from more than 100 US and EU companies and by top government representatives led by European Commissioners for Trade and for Industry and by the US Secretary of Commerce. It is a key part of the New Transatlantic Agenda, adopted at the 1995 Madrid Summit, which laid out an Action Plan to enhance economic and political relations. The EU-US Relationship The US and EU share the world's largest trading relationship - $524 billion - and the largest relationship, with $890 billion in cross investment. More than six million jobs are dependent on these investments. The strengthening of EU-US economic relations should be seen within the context of world-wide multilateral cooperation. The TABD fully supports the rules and principles of the World Trade Organisation. The New Transatlantic Marketplace One of the goals of the TABD is to contribute to the creation of a New Transatlantic Marketplace (NTM) permitting goods, services and capital to flow more easily across the Atlantic. The realisation of this goal requires the progressive removal of traditional transatlantic trade and investment barriers, and the TABD is contributing in a practical, step-by-step manner. CEO-Level Conference A conference is held each year to bring together CEOs and senior-level government representatives, make new recommendations and measure progress on outstanding problems. This unique combination of CEOs and senior government representatives provides an unprecedented opportunity to foster understanding and to achieve breakthroughs on challenging issues. Previous conferences have produced significant advances, including the mutual recognition and harmonisation standards; proactive industry leadership in electronic commerce; and the upholding of strong property protection, among many other achievements. The Working Method of the TABD There are more than 40 issue groups covering different sectors (eg Medical Devices, Telecomm Services), and horizontal issues (eg Customs, Climate Change, Intellectual Property). Each issue group, led by a business executive in the US and EU, is responsible for making joint trade recommendations and tracking their implementation. The issue development process remains flexible to accommodate new challenges that arise in transatlantic business. The issue groups are divided into five working groups, under the active leadership of a US and EU CEO and coordinating Managers. This format is designed to ensure effective coordination, raise visibility of the issues and maximise results. The TABD working groups are: Group I: Standards & Regulatory Policy Group II: Business Facilitation Group III: Global Issues Group IV: Small and Medium-Sized Enterprises (SMEs) Group V: E-Commerce Group III - Global Issues This working group promotes development of the global trading system through cooperative actions that stimulate strengthen the multilateral framework, particularly with respect to the WTO. The Group focuses on the positive benefits of transatlantic and global trade liberalization. The issue committees cover the WTO Agenda, Services, Procurement, Intellectual Property, Investment, Competition, and Climate Change. from TABD website (www.tabd.org/)

Executive board: The TransAtlantic Business Dialogue in 2005

The Executive Board Companies