Michael Maclay is a former UK Foreign Office diplomat and official, now executive chairman of the strategic consultancy Montrose Associates. [1] He is a former director of intelligence firm Hakluyt.

As has been noted in Private Eye, Maclay, worked on Weekend World at London Weekend Television (LWT) under John Birt and Peter Mandelson.[2]

A career Foreign Office official, he spent 'eight years a career diplomat, serving in Lagos, the British Mission to the United Nations, and in the Foreign Office.'[3] Maclay then left the diplomatic service for a media career, spending eight years in the media,[3] first at LWT and then, with David Lipsey, as a founding figure of the Sunday Correspondent. After the paper's collapse Maclay was rapidly recruited to Robert Maxwell's new newspaper venture, The European. He then returned to the Foreign Office as a special adviser to Douglas Hurd as foreign secretary, dealing mainly with the politics of the European Union and the Balkans.[4] Maclay then joined Carl Bildt, the Swedish Conservative, High Representative for Bosnia, as his special adviser and chief spokesman.[3]

Maclay was also an early member of the British American Project (BAP) and remains on its advisory board. He was director of Hakluyt, the strategic intelligence firm, many of whose directors were formerly senior figures in MI6,[5] between January 1998 until 30 June 2002. He joined the Citizenship Foundation, a British charity which encourages active and effective citizenship in 1993, became chairman in 2000 and retired from the board in 2013. [6] '[6] He was senior adviser, now steering board chairman, to the Franco-British-German Club of Three/Institute for Strategic Dialogue [6] Maclay 'has been closely involved with the Club of Three since helping Lord Weidenfeld to set it up in 1995/6.'[3]

In 2003 Maclay was appointed chairman of the strategic consultancy Montrose Associates - which has links with his former colleagues Douglas Hurd and Carl Bildt. [1] 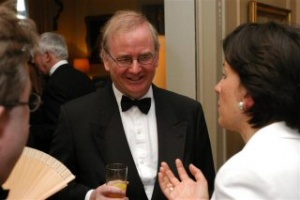 Maclay at a reception in honour of Douglas Hurd at the German Embassy in London, 24 May 2005

His publications include Multi-Speed Europe (Chatham House, 1992), Maastricht Made Simple (The European 1993), and the Pocket History of the European Union (Sutton 1998).[9]