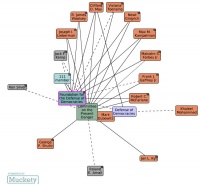 A relationship map for Mark Dubowitz shows him well-connected with neoconservatives.

Mark Dubowitz (born 11 September 1968) is Executive Director of the Foundation for Defense of Democracies(FDD). Dubowitz is also director of FDD's global campaign, The Coalition Against Terrorist Media (CATM) and director of the Iran Energy Project which

provides leading research and analysis in support of strong, broad-based energy sanctions -- including gasoline, natural gas, and oil sanctions -- as part of a comprehensive strategy to end the Iranian regime's pursuit of nuclear weapons, support for terrorism and human rights abuses. It also focuses on the risks to foreign companies in doing business with the U.S. government-blacklisted Islamic Revolutionary Guard Corps, a dominant force in the Iranian energy sector.[1]

Dubowitz has written op-eds for mainstream and right-wing publications on the Iran nuclear issue and has appeared on television and radio outlets including Fox News and Voice of America.

Dubowitz immigrated to Toronto, Canada from South Africa when he was 8 years old.[2] During an NPR interview he recounts being "very upset"[2] with his parents when he realized after a few years that Canada was not part of the United States. He also recalls being "obsessed" with "Palestinian terrorism" that is "directed at Israel"[2] during his youth. On his FDD biography Dubowitz is credited with a "masters in International Public Policy from Johns Hopkins University's Paul H. Nitze School of Advanced International Studies (SAIS) and JD and MBA degrees from the University of Toronto.[1] Dubowitz also studied at the Hebrew University of Jerusalem, Ecole Supèrieure de Commerce de Paris and McGill University.

After marrying and moving to Tel Aviv where he worked at a law firm in the mid 1990s, Dubowitz reportedly "flourished in the world of high-tech venture capital" where he "thought he was happy" until the events of 9/11 which coincided with his birthday.[2]

That day was kind of the worst realization of all my fears and all my concerns. My whole life I'd been obsessing about terrorism and I'd seen terrorism and lived in a country that had been hit by terrorism. At some point I realized terrorism was going global.

Although Dubowitz claims he was successful as a high-tech venture capitalist, he argues that his obsession with terrorism and battling those who view US foreign policy as a reason for terrorism directed at America motivated him to move to Washington, DC where he eventually joined a right-wing think-tank, the Foundation for Defense of Democracies.

there are people speaking about this issue who are instinctively blaming America for what had happened on 9/11 and I was very frustrated by that and my wife said, "Mark, you know, you're throwing shoes at the TV, you either gotta get some therapy or you gotta change careers."[2]

In 2006 Dubowitz argued that his obsession with terrorism continues:

To this day I remain so deeply fearful of the future because I think terrorism has shown to work.[2]

Dubowitz and the FDD

At the Foundation for Defense of Democracies one of Dubowitz's first projects included creating the Coalition Against Terrorist Media which he describes as:

Dubowitz was reportedly the main influencer in convincing the US government to categorize Al Manar as a terrorist organization, making it thereby illegal for any American group, individual or business to engage in any form of financial activity with Al Manar.[2]

In 2010 Dubowitz was writing frequent op-eds calling for sweeping sanctions against any companies or individuals that do business with Iran in a variety of mainstream and right-wing publications. In early October Dubowitz wrote on the Weekly Standard’s blog that 'If the Obama administration opts for only symbolic and selective measures, it could collapse our Iran policy, making it likely to require more drastic measures to prevent Iran from acquiring nuclear weapons.'[3]

Any U.S. action will surely infuriate Moscow and Beijing, as well as those in Washington who have worked to “reset” our relations with both countries. Russia and China could retaliate in a variety of hardball ways that could greatly complicate American and European strategic interests. If Russia were to start delivering S-300 anti-aircraft missiles to Tehran, for example, it could well provoke an Israeli preventive strike on Iran’s nuclear facilities.[5]

A fragile political consensus exists in favor of sanctions in Europe. If the Obama administration doesn’t provide determined leadership by either sanctioning foreign companies which are violating US law, or persuading these companies to terminate their Iranian ties, European governments will not enforce their own sanction.[7]

In the introduction to a 2006 NPR interview[2] Dubowitz is recorded in conversation with Walid Phares (described as a "Lebanese-American terrorism expert") where he advises Phares on how to use dissidents from Muslim countries to combat groups and individuals that the US has labelled as terror threats:

Let's put out backgrounders, productize this, identify the names of these dissidents whether they be in Europe, North America or the Middle East, give them the key talking points...