Mandeep Dhami is Professor of Decision Psychology at the University of Middlesex.[1]

Dhami worked as Principal Social Psychologist at the Defence Science and Technology Laboratory (with secondment to GCHQ) between April 2010 and June 2011.[1] During this period she developed a report for the Joint Threat Research and Intelligence Group (JTRIG) which advised upon the ways in which theories and research from Social Psychology and Criminology could enhance its human intelligence operations. This research encompassed areas of social cognition, obedience, trust and distrust, interpersonal relationships and psychological profiling. In devising the report, 22 JTRIG staff and 7 support staff from GCHQ were interviewed, whose descriptions of JTRIG's operations were characterised by terms such as "discredit", promote "distrust", "deceive", "disrupt", "delay", "denigrate/degrade", and "deter". Targets of these operations reportedly include "terrorists", "domestic extremist[s]", "hacktivists" and in certain instances, "entire countries".[2][3] 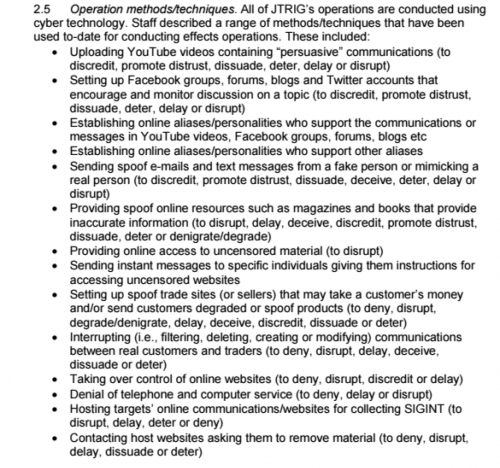 Dhami's report became a subject of controversy following its revelation by former US National Security Agency contractor Edward Snowden. The Intercept approached a number of individuals within the psychological community for commentary on its content, some of whom were cited within the document itself.[3] Dr Stephen Soldz, co-founder of the Coalition for an Ethical Psychology, reportedly labelled the document "deeply disturbing and grossly unethical". Similarly, Dr Bradley Olson, former president of the American Psychological Association (Division 48) considered it a "terrible violation of psychological ethics". In an email to the Intercept, Peter Smith (cited in the report) expressed discomfort over the use of knowledge from Social Psychology "to deceive people" and the handling of ethical guidelines; Dhami's report states that 'JTRIG may need to develop a bespoke code' where the ethical codes of the British Society of Criminology and British Psychological Society are not relevant or applicable to its operations.

However, responses to the Intercept were not universally critical of Dhami's report. Dr Christian Crandall, Professor of Social Psychology at the University of Kansas, observed that the report was commissioned prior to the Snowden revelations, and consequently "we might give Prof. Dhami the benefit of the doubt, that she might not [have] know[n] or anticipate[d] the extent of misconduct in the intelligence agencies". Susan Fiske, whose work was cited by Dhami, highlighted that her book is purchasable within the public domain. Dhami was also defended by British law firm Schillings, who contended that she upheld "the highest ethical standards" as an independent observer, and that she has a "strong track record" of publishing critiques of government policies. The ethical nature of Dhami's contribution was defended further by the University of Middlesex and Joseph Forgas, the latter of whom stated that "If there are indeed any ethical issues here, it is the responsibility of democratic governments to supervise such activity".[3][4]