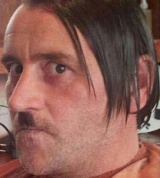 Lutz Bachmann founded the group Patriotic Europeans Against Islamisation of the West (PEGIDA) in October 2014 in Germany. In July 2016, he also founded the Popular Party for Freedom and Direct Democracy (FDDV).

On November 8 2016 Bachmann and his deputy leader, Siegfried Däbritz, were banned from leading weekly PEGIDA rallies until 2021. [1]

Banned from entering the UK

In March 2018 Bachmann was refused permission to enter the UK at London Stansted airport and was deported back to Germany. The reason given by British authorities was because his presence “is not conducive to the public good.” Bachmann had planned to attend a rally at Speakers' Corner in Hyde Park London organised by ex-EDL leader Stephen Lennon, aka Tommy Robinson, in protest against the deportation the previous week of Austrian far-right Generation Identity leader Martin Sellner and his American partner Brittany Pettibone, also a far-right activist.[2]

Bachmann is reportedly the son of a butcher and was born in Dresden.[3] His profession has been described different in various media, ranging from publicity agent[3] to chef-turned-graphic designer. According to The Independent he admits to having spent two years in prison and has criminal convictions for drug offences[4] driving offences[5] and burglary[6].

A translation of a German press agency article of 16 December 2014 on the counterjihad website Gates of Vienna states that Lutz is aged 41. It also says he admitted, in December 2014, to having fled to South Africa 17 years to try to escape a three-year sentence for a string of 16 burglaries in Dresden. But he was deported to Germany after his true name and passport came to light.[7]

Lutz 'insists he is not a racist'[4] and is reported to have said, as evidence of this:

I had a Turkish best man, and I have a lot of Muslim friends.[7].

At least one journalist has noted the irony of his own criminal record with his accusation that immigrants contribute to crime in Germany.[5] 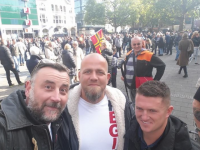 According to Der Spiegel, Lutz claims that PEGIDA grew out of a Facebook group which he started after he witnessed a rally in Dresden by supporters of the Kurdish Workers' Party (PKK) which opposes the Islamic State militants in Syria and Iraq. He claims he decided to start a group primarily to oppose arms shipments to the PKK.[6]

Bachmann stepped down as leader of the group after a photograph of him posing with an Adolf Hitler moustache was published by a local German newspaper Dresden Morgenpost and subsequently on the front page of the national Bild. In addition, state prosecutors announced they had launched an investigation into him, after it was revealed that he has described immigrants as 'cattle, 'scumbags' and 'trash' in Facebook posts from September 2014.[3][8]

He was replaced as leader by Kathrin Oertel but within a week she had also resigned.[9]. One of four other leaders who quit at the same time as Oertel claimed Bachmann had 'continuing influence' on the movement and cited this as a factor in their resignation.[10] Oertel went on to found a new rightwing organisation called Direkte Demokratie für Europa, or Direct Democracy for Europe. A month later Bachmann was reinstated and claimed that his 'Hitler photo' had been doctored to include the Hitler moustache, although he had not mentioned this when the furore first broke out.[11]

Charged with incitement to racial hatred

In October 2015 Bachmann was charged by Dresden state prosecutors with incitement to racial hatred over the September 2014 Facebook comments. [12] He was trailed for those charges in April 2016. [13]

In November 2016, the Dresden state court confirmed that Bachmann would have to pay the fine of 9,600 euros for 'inciting hatred against foreigners'. [14]

On July 7 2016, Bachmann founds his own political party called the Popular Party for Freedom and Direct Democracy (FDDV). He claims they intend to work with the far-right AfD in the 2017 elections. [15]

In September 2016, he reportedly moved to Tenerife to escape 'persecution' in Germany. The Independent wrote: 'Lutz Bachmann has previously referred to those fleeing conflict and persecution as “scum” but has reportedly been living on the Spanish island, off the coast of northern Africa, for several months'. [16]