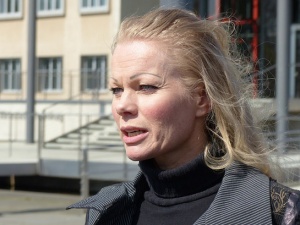 Kathrin Oertel co-founded the anti-Islam, anti-immigrant German movement PEGIDA, an acronym for the German for 'Patriotic Europeans Against Islamisation of the West'.

Oertel briefly led the PEGIDA movement after the resignation of founder Lutz Bachmann following the publication of photographs of him posing as Hitler and the announcement that authorities were investigating him for inciting hatred. Within a week she had also resigned.

PEGIDA announced on its Facebook page that Oertel, reportedly 37 years old in January 2015, had quit 'due to the massive hostility, threats and career disadvantages', adding: 'Even the strongest of women has to take time out when at night photographers and other strange figures are sneaking around outside her house.'[1]

She had become well known in Germany after appearing on a 'widely watched' German television talk show, Guenther Jauch on 19 January, and reportedly demanded 'dialogue with the political establishment'. According to the BBC she had 'tried to take PEGIDA mainstream' and 'distanced herself from the more radical Leipzig branch of Pegida', known as LEGIDA. Four other PEGIDA leaders quit at the same time and one reportedly cited the sister-movement, LEGIDA, and the 'continuing influence' of Lutz Bachmann as factors in their decision.[2]

It was reported on 2 February 2015 that Oertel had, after leaving PEGIDA, started a new movement called Direct Democracy for Europe, which planned to hold its first demonstration on Sunday 8 February 2015. It reportedly characterised itself as 'just to the right of the CDU', Angela Merkel's party.

Also involved were other ex-PEGIDA leaders who quit at the same time as her, including Bernd-Volker Lincke and René Jahn. The new initiative was expected to 'move away from the anti-Islam stance' of PEGIDA.[3]