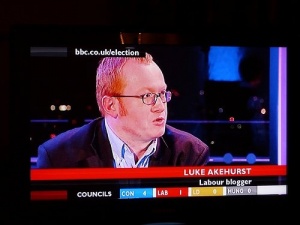 Luke Akehurst, right wing Labour Party activist and candidate, Israel lobbyist and Director of We Believe in Israel a project of BICOM

Luke Akehurst is the Director of We Believe in Israel a project of the pro Israel campaign group BICOM. Akehurst has been a Labour Party activist since 1988, and is director of Labour First a lobby group on the old right of the party.

Akehurst stepped down as a councillor at the local elections in May 2014, one of 18 Labour councillors in Hackney to do so. He was reportedly moving to Oxford with his family.[4] Akehurst hinted on a LabourList blog that his departure from politics was not permanent, writing that he had 'perhaps temporarily' left 'public office'.[5]

Luke continues to serve longstanding clients such as Balfour Beatty, Finmeccanica and GKN plc with loyalty, efficiency, good humour, political intelligence and an encyclopaedic knowledge of facts and figures. Over the last year, he has won prestigious new clients such as support services giant Serco Group.

He advised Shropshire County Council on achieving its bid to become a unitary council, and advised Devon and Suffolk County Councils on their successful campaigns, against the political odds, to fend off unitary bids by Exeter and Ipswich. Luke is often found offering counsel and tactical and strategic insight at the heart of some of the key issues in Whitehall and Westminster.[7]

When he was both a lobbyist for the arms industry and a London Councillor Akehurst still found time to write to the press about Israel, complaining to the New Statesman in July 2006 that the Palestine Solidarity Campaign 'shows an outline map of "Palestine" that includes the entire territory of Israel. One wonders what the PSC wants to happen to the 5.5 million Jews in Israel under this "one-state solution".' Akehurst did not reveal either affiliation in his letter signing it only 'Luke Akehurst London N16'[8]

In 2007 it was reported that Akehurst was advising Hazel Blears in the election for Deputy leader of the Labour Party:

Labour Party chair Hazel Blears is expected to announce her candidacy soon, and is understood to be receiving advice from Weber Shandwick director of public affairs Luke Akehurst.

Akehurst downplayed this, saying: 'I will be supporting Hazel if she does run but it will be in my spare time.'[9]

Akehurst was appointed as Director of We Believe in Israel, a project of BICOM in August 2011[1]

Member of Unite, the Co-Op Party and Fabian Society.[3] Active trade unionist for 19 years – including seven years as a member of Amicus London Regional Political Committee.[3]