From Powerbase
(Redirected from Lord Beloff)
Jump to: navigation, search

"Think-tanks can be important in bringing about a change in broad public perceptions...In their day the Institute of Economic Affairs and the Centre for Policy Studies undoubtedly helped to make collectivism unrespectable again." - Max Beloff, 1993 [1] 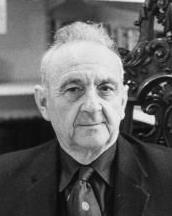 Beloff was born on 2 July 1913 at 21 York House, Fieldway Crescent, Islington, London, the elder son in a family of five children of Simon Beloff, general merchant, and his wife, Marie, (née Katzin). His parents were Orthodox Russian Jews who had emigrated to Britain in 1903.[2]

Beloff was educated at St Paul's School, London and Corpus Christi College, Oxford, where he studied modern history, graduating with first-class honours in 1935. He then studied for a B.Litt. on seventeenth-century English history.[3]

In 1939 Beloff was appointed an assistant lecturer in history at the University of Manchester, specializing in seventeenth-century history. He served in the Royal Corps of Signals in 1940–41, and was invalided out, returning in 1941 to Manchester, where he added American history to his teaching. In 1946 he returned to Oxford as Nuffield reader in the comparative study of institutions, holding a fellowship at Nuffield College from 1947. In 1957 he was elected Gladstone professor of government and public administration, with a fellowship at All Souls College. [4]

A former member of the Liberal Party, Beloff swung dramatically to the right after the emergence of the New Left in the 1960s and the union activism of the 1970s. He was particularly concerned about the role of education in social indoctrination, and was described by The Times as an "unrelenting foe of academic Marxism". [5] In the summer of 1968 Beloff wrote to The Times, blaming the student unrest on university expansion:

The troubles from which our universities are suffering are due to the fact that university expansion, desirable though it may be in itself, has brought into universities a number of students (and in some cases, alas of teachers) who whatever their mental capacities are tempermentally unsuited to the necessary restraints and self-discipline which the pursuit of scholarly inquiry demands. And they are in many cases egged on into protest by older students from the United States and elsewhere with no commitment to this country and no loyalty to her institutions or fortunes.[6]

Beloff left the Liberal Party in January 1972 because of “a long standing argument about the tolerance extended to Young Liberals who preach anarchism and socialism and practise direct politics in contempt of parliamentary institutions”[7] Beloff’s obituary in The Times gives the following account of his subsequent political journey:

Beloff made the transition from Left to Right, largely prompted by the sight of over-mighty trade unionism. It was the exodus of men such as him that gave Thatcherism an overall intellectual depth that its economic policies alone would not have merited.

Beloff became one of the leading lights of what was then called the New Right, and used think-tanks such as the Centre for Policy Studies, the Institute for the Study of Conflict and Terrorism and the Institute of Economic Affairs to try to keep the Conservative Governments of the 1980s up to the ideological mark. [8]

Institute for the Study of Conflict

His anti-collectivist views on education were put into bricks and mortarboards when he became the founder and Principal of the private University College at Buckingham (now the University of Buckingham), which allowed him to test principles he had been propagating since the 1960's. [11]

University College at Buckingham was the first (and remains the only) private university in the UK. Beloff left Oxford to become principal of the College in 1974, a position he held until 1979. [12] After Beloff’s death the University established the The Max Beloff Centre for the Study of Liberty, commenting on its website that, “Max's ghost will smile down on us with approval.” [13]

Beloff joined the Conservative Party in 1977, saying “Classical Liberalism...seems to have gone into the Conservative Party” [14] Beloff’s companioning of private power impressed Margaret Thatcher, and she awarded him a knighthood in 1980 and a life peerage a year later. [15] The Times reports that up to the 1983 election Beloff was “active in the [Conservative] party's research and policy process” and also undertook “a substantial amount of public speaking” for the party. [16]

During the 1980s, Beloff chaired the Dicey Trust,[17] a conservative organisation established in January 1975 by pro-Apartheid campaigners, purportedly to ‘encourage the rule of law’ through lectures and presentations at schools and colleges, though in reality to discredit challenges to state authority particularly direct action campaigning groups. [18] The Trust, which was awarded charitable status, was set up by barrister Francis Bennion. Other members included the conservative academic Antony Flew, the Conservative MP Rhodes Boyson and Gerald Howarth, who would later become Shadow Defence Secretary under David Cameron.

In later years Beloff became an outspoken opponent of the European Union, and in particular of continental federalist ideas. He argued that British membership of the European Union was incompatible with the survival of its tradition of liberal constitutionalism. He also criticised Britain's lessening imperial and a month before his death he again sparked controversy by comparing the rise of Tony Blair to that of Adolf Hitler. [19]