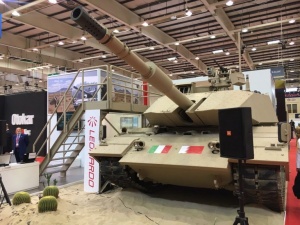 Leonardo S.p.A., formerly Leonardo-Finmeccanica and Finmeccanica until April 2016, is an Italian global high-tech company and a key player in aerospace, defence and security. Headquartered in Rome, it has 180 sites worldwide.

Leonardo is Italy's largest arms producer and among the top 10 globally. According to SIPRI, Its arms sales reached $8.5 billion in 2016—a decrease of 8.2 per cent compared with 2015. Leonard's products include military helicopters, fighter aircraft, drones, missiles, naval guns, artillery and armoured combat vehicles.[1]

The company has sold drones to Pakistan, armoured vehicles to Oman and helicopters to Algeria, Libya and Turkey according to Campaign Against the Arms Trade.

Leonardo's UK division was merged into a single company from 1 January 2017, bringing together AgustaWestland Ltd, Selex ES Ltd, DRS Technologies UK Ltd and Finmeccanica UK Ltd. under the name Leonardo MW Limited, 'where the M and W stand for Marconi and Westland' - 'important parts of our heritage' according to a company news release.[2]

In October 2017 a freedom of information request revealed that Leonardo holds 13 passes allowing its staff access to the Ministry of Defence buildings in Whitehall. Other companies included Capita (84 passes), Fujitsu (50), BAE (19) and PA Consulting (15). [4]