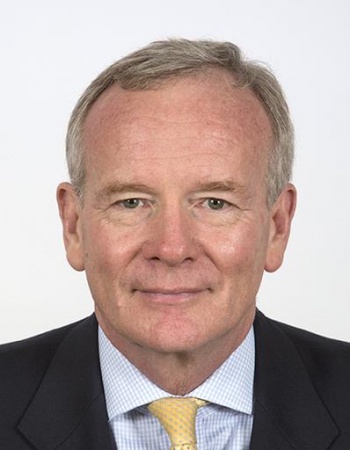 Air Vice Marshal John Ponsonby OBE is a retired Royal Air Force senior officer, who served in Northern Ireland, The Falklands and Bosnia, among other places.

After leaving the military in 2006, Ponsonby joined AgustaWestland as senior vice-president of training. His most recent position was as managing director of Italian arms giant Leonardo's UK helicopter division, (which included AugustaWestland) until December 2017.

Ponsonby was a speaker at the DSEI 2017 arms trade fair in London. His chosen topic was 'The Changing Role of Rotorcraft in an Uncertain World'. [1]

Since leaving the MOD Ponsonby has had five meetings with MOD officials in Whitehall in his role as Managing Director, AgustaWestland at Leonardo-Finmeccanica according to Campaign Against the Arms Trade. He also had six other meetings with the Prime Minister's Office, the Home Office, FCO, UKTI, DSO, BIS and HoC Defence Committee. [2]

According to his speaker biography:

Ponsonby was commissioned into the Royal Air Force in April 1983, after 9 years service in the British Army. He served as a support helicopter pilot throughout his career, operating in North West Europe, Northern Ireland, The Falklands and Bosnia. He held staff appointments at Group, Command and MOD level, including as Deputy Principal Staff Officer to the Chief of the Defence Staff. He was appointed Air Officer Commanding Training Group on 4 January 2005 and became Air Officer Commanding No 22 (Training) Group on 30 October 2006, where he was responsible for fixed and rotary wing flying training, RAF recruiting, individual ab-initio and specialist ground training and oversight of the Air Cadet Organisation.

He is a graduate of the RAF Staff College and the Joint Service Command and Staff College. He was appointed OBE in the 1998 New Year Honours List, ADC to HM The Queen in 2001 and received the Queen's Commendation for Valuable Service in the 2002 Operational Honours List.[1]