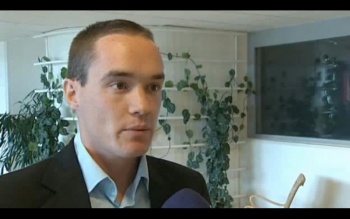 Kent Ekeroth is a counterjihad activist, twin brother of Ted Ekeroth and the International Secretary of the far-right Sweden Democrats[1] and a member of the Swedish parliament.[2]

Ekeroth was sacked as an intern at the Swedish embassy in Tel Aviv in November 2006.[3]

"This is a very special case because of the fact that he had been active - especially on the Internet - using embassy computers to spread xenophobic, anti-immigrant and anti-Muslim propaganda."[4]

I did not distribute any kind of so-called "hate messages" as indicated by the article. My writing did not incite hate toward any group or individual.[5]

In September 2009, Ekeroth hosted a Sweden Democrats 'anti-Islamisation' seminar in Mälmo. Speakers included Jordanian journalist Ghada Hanna, Mrutyuanjai Mishra from India and Alan Lake from the UK. Lake, who has described Ekeroth as a 'good friend'[6], discussed how the counterjihad movement in England was building alliances with football supporters.[7]

In September 2011 Ekeroth attended a Berlin event in support of René Stadtkewitz's new party Die Freiheit, which was also attended by Geert Wilders.[8]

In 2012, Ekeroth and two other Sweden Democrats MPs were caught up in a scandal dubbed 'ironbargate' after a video emerged which showed them telling the Swedish-Kurdish comedian Soran Ismail that Sweden was 'my country, not your country' in a threatening manner and arming themselves with metal bars.[9]

Ekeroth reportedly registered the domain name for the website Avpixlat, widely regarded as an anti-immigrant hate blog.[10] According to Swedish newspaper Aftonbladet he also organised donations to the site, channeled via his bank account, and had editorial influence.[2][11]