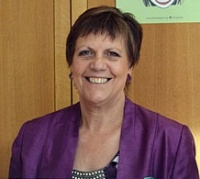 Julie Hilling was the Labour Party member of Parliament (MP) for Bolton West from 2010 to 2015.

Hilling lost her seat in the 2015 general election to the Conservative Party's Chris Green by 801 votes.[1]

Hilling was a member of the all party parliamentary groups on rail, youth affairs, children, community & voluntary sector, save the pub and high-speed rail, appointed a parliamentary private secretary in Yvette Cooper's women & equalities team in October 2010 and promoted to join the Whips office in June 2012.[2]

Before entering Parliament, Hilling worked as a senior regional organiser for TSSA and a community and youth provision worker. [3]

Hilling studied chemistry at Nottingham University and gained a diploma in youth and community work from Manchester Polytechnic. [4]