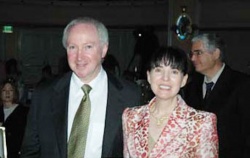 Joyce Chernick is the wife of multi-millionaire Aubrey Chernick and a key funder of Robert Spencer's Jihad Watch.[1] She and her husband also led the effort to raise $3.5 million in venture capital to start Pajamas Media, a far right pro-Israel blog network which has kept up a steady stream of anti-mosque postings.[1] In 2010 Politico reported that the Chernicks were key funders behind the opposition to the Cordoba House initiative or "Ground Zero Mosque:"

But there’s also big money behind the mosque opposition, as highlighted by the relationship between [David] Horowitz’s Los Angeles-based nonprofit, Jihad Watch — the website run by Spencer “dedicated to bringing public attention to the role that jihad theology and ideology play in the modern world” — and Joyce Chernick, the wife of a wealthy California tech company founder.[2]