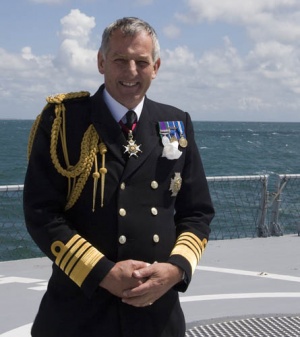 Band was the First Sea Lord and Chief of the Naval Staff from 2006 until 2009. As First Sea Lord he had command over all naval personnel and vessels, including nuclear-armed submarines. The role includes advising the British defence secretary on maritime strategy and policy.

Since retiring from public service Band has taken up several defence industry roles.

He acts as a defence adviser to Babcock International and as a strategic adviser and non-executive board member of arms firm Lockheed Martin and also Survitec, which makes marine safety and survival equipment. Babcock maintains the British Navy’s nuclear submarines and manages Faslane naval base.

Signatory of open letter to the PM about Trident renewal

In 2015 Band was one of a number of former senior military and government signatories to a lengthy open letter to incoming prime minister David Cameron. regarding the Trident nuclear programme renewal. The group, which included ex-Labour minister Lord Hutton and former chief MOD scientific adviser Sir Keith O’Nions, argued that it would be 'irresponsible folly to abandon Britain’s own independent deterrent'. [1] Hutton had been employed by Lockheed as a consultant since 2014.