John Robertson was elected Labour MP for Glasgow Anniesland, as it was then called – where he was born and grew up – in a by-election in 2000 following the death of former First Minister Donald Dewar, for whom he had been election agent.[1] His constituency has been known as Glasgow North West since the May 2005 general election.

Robertson lost his seat in the 2015 general election to the Scottish National Party's Carol Monaghan by 10,364 votes.[2]

Before becoming an MP Robertson worked for British Telecom for 31 years, working his way up from an apprentice to management. He was highly active in the Communications Workers Union (CWU) and was West of Scotland chairman of the union Connect for three years, until elected to Parliament.

Robertson has been chair of the All-Party Parliamentary Group on Nuclear Energy since 2005,

due to my firm belief that nuclear energy is our best option in terms of tackling climate change. The industry in [sic] fast moving, and our group invites various companies in the industry to provide briefings and information on what is happening. This year [2013] we also had the previous Energy Minister address the group, for a discussion on nuclear in the UK’s energy mix. [3] 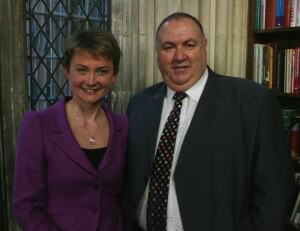 Date of visit: 6-11 September 2012 Name of donor: H M Government of Gibraltar Address of donor: 150 Strand, London, WC2R 1JA Amount of donation (or estimate of the probable value): air fare for myself and my wife with a value of £999.01 and hotel accommodation with a value of £445; total: £1,444.01 Destination of visit: Gibraltar Purpose of visit: Visit as part of a Parliamentary Delegation with the APPG on Gibraltar, to celebrate Gibraltar Day. (Registered 1 November 2012)