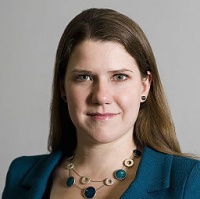 In 2015, Swinson voted against a moratorium and a requirement for an environmental permit being granted for fracking. She also rejected carrying out a review of the impact of shale gas on climate change, the environment, the economy, and health and safety.

In June 2019 the Sunday Mail revealed that Swinson had accepted a £10,000 donation from a director of Warwick Energy Ltd – a company with fracking licences across England. Mark Petterson had made the donation in July 2017 and another £4000 in January 2019.

The Sunday Mail pointed out Swinson's 'hypocrisy' in pushing green credential taglines such as 'Build an economy that puts people and the planet first' and boasting on her website that she has 'campaigned tirelessly to save our environment' and even 'took to the streets with Extinction Rebellion'. It added:

'A number of other proposals at Westminster designed to fight climate change and protect the environment were not supported by Swinson. She voted in favour of cutting the subsidy for electricity generated via renewable or low-carbon methods and against ensuring the future of the payments in 2011. In 2013, Swinson, 39, voted against targets for the amount of carbon dioxide or other greenhouse gases produced per unit of electricity generated.

Meanwhile, in 2012, she voted against requiring the UK Green Investment Bank to explicitly support the target of reducing UK carbon emissions to 20 per cent of 1990 levels by 2050. Swinson also refused to support the completion of a cycle path in her constituency of Milngavie after complaints from motorists.' [2]

Swinson was the Liberal Democrats MP for East Dunbartonshire from 2005 until the 2015 general election, when a surge in support for the Scottish National Party (SNP) resulted in her losing her seat to the SNP candidate John Nicolson. [3] Her seat was considered the most marginal out of the 11 seats held by her party in Scotland, which she had won in 2010 with a majority of 2,184 over Labour. [4]

Swinson served as parliamentary under-secretary at the Department for Business, Innovation and Skills from 2012[6] with responsibility for employment and equalities.

Swinson was previously the Liberal Democrats spokesperson on foreign affairs, equality, Scotland and the arts. She was also a member of the Environmental Audit Select Committee from 2007 to 2010 as well as being a chairperson of the Liberal Democrats Women’s Policy Working Group in 2009. [7]

After graduating in 2000, Swinson worked in Yorkshire as a marketing and PR manager for the Emap radio station Viking FM. In 2002 she moved back to East Dunbartonshire and worked for Glasgow-based media business SpaceandPeople. [7]

In August 2015, Swinson sought the advice of the Advisory Committee on Business Appointments to set up as an independent consultant. The committee advised that she serve a two-year lobbying ban from her last day in office and that she seek confirmation from the committee for each individual commission. After October 2015 she took up commissions with Women of the World Festival Advisory Committee, Everywoman, The Parliament Project, Northern Power Women Awards , Chartwell Speaking Agency, Eversheds and IPA.

In May 2016 she took up a further four commissions with her consultancy with; DBA Speakers, CMI Women in Leadership and the CIPD (Chartered Institute of Personnel and Development, the professional association for human resource professionals), and Eversheds, the British multinational law firm. In September, she took up commissions with University College London and InclusIQ, an organisation that provides workshops on workplace inclusivity. In October, she again received approval for a paid commission with Portland Communications. [8]

Swinson also sought advice from ACOBA regarding a role on the advisory committee of the Advertising Standards Agency. The committee noted Ms Swinson had occasional contact with the ASA while at BIS, and advised that she serve the standard two year lobbying ban from her last day in office. She took up the appointment in January 2016.[9]

Ms Swinson took up three further roles in 2015 under the advice of ACOBA, on the basis that she serve a two-year lobbying ban from her last day in office for each:

In November 2016, she was commissioned by Portland to advise the firm on diversity in the workplace. ACOBA gave Swinson the green light for the new role with Portland, which lasted only for several days. [11]

Swinson is married to fellow LibDem MP Duncan Hames,[12] who also lost his seat in the 2015 general election.

Swinson attended Douglas Academy in Milngavie, before that she studied management at the London School of Economics. [7]

As a backbencher, Swinson co-founded the All Party Parliamentary Groups on Allergy, Wellbeing Economics, and Body Image. She is a governor of the Ditchley Foundation. She was also a member of the Speaker’s Conference from 2009 to 2010. [7]