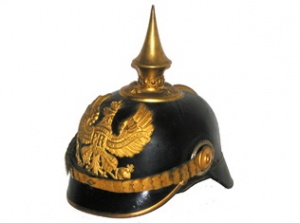 Hubertus Hoffmann is president and founder of the World Security Network (WSN). On the WSN website Hoffmann is described as a "German entrepreneur and geostrategist".[2]

His WSN biography states he has worked as advisor in the European Parliament (Office of Prof. Hans-Gert Poettering, now President of the European Parliament), the German Bundestag (Parl. State Secretary of Defense Peter Kurt Wuerzbach MP) and with the U.S. Senate (Sam Nunn, Gary Hart) in defence affairs for many years. He was a Research Fellow at the Center for Strategic and International Studies (CSIS), Georgetown University (1983-84), and also worked as a journalist in the White House Press Corps and as an editor in ZDF, the largest TV station in Europe. Hoffmann holds a PhD in political science with "summa cum laude" and is a lawyer and a reserve officer in the German Army.[3]

Hoffmann is co-founder of the General Capital Group which invested €3.3 bn in companies that include Volkswagen, BASF, Thyssen Krupp and Lanxess. Members of its board have connections to Morgan Stanley, IBM, GEC ALSTHOM, Perot Systems Corporation USA, Textron USA, Siemens, Axel Springer and Allianz AG. [4]

Hoffmann has from 1979 to 1983 supported NATO’s Two Track Decision to deploy medium range nuclear weapons in Europe combined with mutual arms reductions on the Russian side which put him on the target list of RAF, the German terrorist organization. In 1978 he founded a popular German appeal (Dattelner Appell) to dismantle the new Russian SS-20 missiles and to combine it with the non-deployment of NATO Pershing II and Cruise Missiles, which was signed by more than 100 members of the German Bundestag, U.S. Senators like Edward Kennedy and others, which was on December 12, 1979 successfully integrated into NATO's Two Track Decision and later into the INF Treaty. In 1980 he initiated a CDU/CSU resolution and Federal Law of the Bundestag for an Annual Report on Arms Control and Disarmament, which since than is published by the German Goverment.[5]

Hoffmann's biography also states that he was Chairman of the Christian-Democratic (CDU) Committee for Foreign, Defense, European and Inner German Affairs and active in promoting the German re-unification and a strong NATO, adding that:

In 1984 Dr. Hoffmann organized the exchange program for young reserve officers from the U.S.A. and Germany with the support of than Parl. State Secretary of Defense Peter Kurt Wuerzbach. He was a German member of the Executive Committee of the NATO Reserve Officers Association CIOR. He supported the Mudjahedin from 1985-1990 against the Russian invasion of Afghanistan, visiting them in the mountains in 1985 and writing the Afghanistan report for the European Parliament. In 2002 at Friedrichruh Palace near Hamburg, Fürst Ferdinand von Bismark bestowed upon Dr. Hubertus Hoffmann the "Bismark Medal in Silver with Golden Oak Leaves" for his "patriotic faithfulness and proven Prussian national consciousness".[6]

Hoffmann's long-time mentor was Fritz Kraemer, who was given to advising world leaders: "No provocative weakness, please!" (See Fritz Kraemer). The idea that military weakness provokes attack is an idea that Hoffmann has embraced in his own philosophy.[7]

The New York-based World Security Network has been described in a speaker note profile of Hoffman as "the largest global elite network for foreign and security policy with the purpose of 'Networking a Safer World'."[8] The same source states that:

WSN has two goals: Networking of the young elite via the Internet and promoting international discussion of fresh solutions and proposals. Young authors can publish their own analyses worldwide, and a network of 59 mostly young editors with 27 nationalities report from all over the world. The International Advisory Board consists of 53 well-known experts from 15 countries, including 14 generals and admirals. More than 303,000 members of the international information elite receive the weekly electronic newsletter; 158 media partners (including CNN, UPI and Newsweek) and 85 institutes (including RAND and IISS,) World Security Network website, cooperate with WSN and make use of the analyses.

The WSN website tells us what WSN is not[9]:

The organisation's goals are stated as:

This is coupled with the disclaimer that:

We do not want to leave the important area of foreign and defense affairs to a few extremists, the mediocre majority of politicians and bureaucrats, and primarily backwards-looking analysts without an action orientation. WSN promotes timely actions to implement double peace strategies: power on one side, diplomacy and reconciliation on the other. The World Security Network's broad action approach considers all three levels required to resolve a conflict: visions, structures, and actions. These must include innovative master plans, sufficient funding, and rapid implementation.[11]

WSN has 59 Advisory Board members from 19 nations containing 16 generals and admirals.[13]

Hoffmann has many Atlanticist[14] affiliations. His WSN biography says he is a member of the Young Presidents' Organization (YPO) (Rhine Chapter).[15] The YPO is an organization made up of company presidents from around the world. The YPO ties in with Jim Warner's OnCourse International YPO retreats[16] See the OnCourse International website for some interesting speakers.[17]

Founded by Ray Hickok in 1950, the YPO is a millionaires' club to put their young in touch with the global elite.[18] It has ties to the Aspen Institute, which

offers a variety of programs to YPO members that serve leaders from many different fields... Leaders leave better prepared to manage relationships with diverse constituencies, conduct business in a global environment and motivate followers through visions that unite and inspire.[19]

Hoffmann is also a member of the International institute for Strategic Studies in London, a Konrad Adenauer Foundation scholar and a Young Atlantic Leader (1992) with Atlantik-Brücke (a Berlin-based organisation founded in 1952 with the stated aim of promoting German-American understanding after World War II).[20]

In 1959, the American Council on Germany (ACG), in collaboration with the Atlantik-Brücke, initiated the American-German Biennial Conferences. At these conferences, high-level German and American opinion shapers and policymakers from academia, business, government, media, and the military meet to discuss the major bilateral and international issues of the day and how to make money out of them. Among the ACG founders were General Lucius Clay, Christopher Emmet, Ellen Z. McCloy, and Eric M. Warburg. John J. McCloy, the first civilian U.S. High Commissioner in Germany following the war, was the founding Chairman and continued to serve until 1987.[21]

The ACG website also states that the conferences were conceived and initiated by the venture capitalist and computer pioneer John Diebold, "who also served as Vice Chairman of the American Council on Germany", in collaboration with Christopher Emmet, who became its full-time director.[22] Diebold started John Diebold Inc., an investment firm, in 1967.

Diebold also started the Diebold Institute for Public Policy Studies, Inc., which was in the advance guard for neo-liberalism. This how the Institute's approach to spreading privatization was described on its website in 2007:

In undertaking its early work on privatization, the Institute proceeded, as always, on the assumption that a small think tank such as the Diebold Institute, must focus on reaching leadership groups rather than a general audience. The Ford Foundation, with the direct and personal intervention and encouragement of its President McGeorge Bundy, provided substantial initial outside financing of the Institute's work on privatization during the early seventies.[...] Somewhat later the British Institute of Directors also requested presentation of a paper at their annual Albert Hall meeting which occurred on the eve of Mrs. Thatcher's election to the premiership. The reaction of this audience was overwhelmingly positive. Years later, in a speech, Lord King credited Diebold with having introduced the term "privatization" to Great Britain. [23]

According to a book by Zack Carden, John Diebold offered Henry F. Sherwood the directorship of the Diebold Research Program-Europe, and while there Sherwood became an undercover agent for the CIA.[24]

Hoffman writes of Al Qaida on the WSN website:

Only 65 years after its worst diplomatic mistake that cost more than 50 million people their lives - the appeasement of Adolf Hitler at the Munich Conference – Europe is about to make the same mistake again, now in response to the terrorist threat of our time.[25]

In a 42-page document obtained by the Research Institute of the Norwegian Ministry of Defense in December 2003, Al Qaida wrote that Spain is the weakest ally of the US in Iraq. The document noted that terror in Spain would lead to withdrawal of her troops and that an attack would be most effective before election day. After only two to three attacks, "Spain would give up its engagement in Iraq," Al Qaida wrote. Congratulations Osama bin Laden! You got what you wanted from the new Spanish Prime Minister! Perfect targets and perfect timing too! It is worth bombing innocent people in Europe, it moves their weak democratic leaders to give-in and appease Al Qaida![26]

Hoffmann cites the Norwegian government document as saying, "more countries will follow [Spain]". This leads him to the conclusion that:

Therefore, Mr. Zapatero is personally responsible when other allies of the US in Iraq get under attack. By "provocative weakness," he is provoking those attacks like Chamberlain did with Adolf Hitler in Munich in 1938.

Also described by Hoffmann as "another 'Munich of Our Time' act" was:

The EU statement ... calling the killing of Sheikh Yassian “extra-judicial” and criticizing Israel for the elimination of the spiritual leader and founder of the terrorist group Hamas... 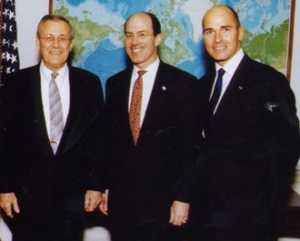 The article is accompanied by a photograph of Hoffman with Donald Rumsfeld and Inspector General Joe Schmitz in the Pentagon (opposite).

Some of Hoffmann's writings are exercises in retrospective thinking. For instance, one states "Could 9/11 have been avoided? The answer is a clear and sound: YES! How?"

The answer is given as:

in 1998, the appropriate and necessary U.S. action should have been to wipe out bin Laden’s infrastructure by permanent and massive covert and military actions starting in 1998 to 2001.[27]

He also asks, "Who is to blame for this?" and answers, "CIA Director George Tenet is one of them."[28]

See also Fritz Kraemer. Kraemer was Hoffmann's mentor for 25 years and Hoffmann wrote a book about him.

WSN's website includes WSN-TV WSN TV, where you can watch its experts and Hoffmann himself.