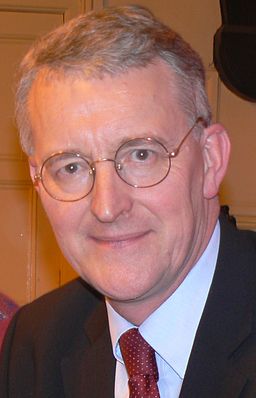 Hilary Benn was a special adviser to former secretary of state David Blunkett from 1997 to 1999.[1] He has been the Labour Party MP for Leeds Central since 1999 and is the current shadow secretary of state for environment, food and rural affairs.

After the 2015 general election he was announced as the shadow foreign secretary.[2]

Hilary Benn is the son of "icon of the Labour Left" Tony Benn, although seeks to distance himself from his father's politics: he is "a Benn, but not a Bennite"; described by the BBC as "a committed Labour moderniser".[3] He cites Nelson Mandela and Clement Atlee as his political heroes.[4]

Benn attended Holland Park Comprehensive School and Sussex University. After leaving University, Benn worked for trade union the Association of Scientific, Technical and Managerial Staffs (ASTMS) first as a Research Officer, latterly becoming Head of Policy. In 1979, Benn was elected to the Ealing Borough Council. He was Deputy Leader of the Labour Group from 1985 to 1994, and Deputy Leader from 1986 to 1990. In the 1983 and 1987 general elections, Benn was the Labour candidate for Ealing North. He was defeated by Conservative candidate Harry Greenway on both occasions.[6]

In 1988, he was elected as Chair of the Association of London Authorities Education Committee. In 1993, he was appointed Head of Research at the trade union Manufacturing, Science, Finance (MSF). He was promoted to Head of Policy and Communications in 1996. Following Labour’s 1997 General Election victory, Benn was appointed as special adviser to David Blunkett, then the Secretary of State for Education and Employment. His responsibilities included lifelong learning and he was involved in establishing the Union Learning Fund.[7]

From 1994 to 1999, Benn was Chair of the Management Committee for the unions think tank Unions 21.[10] From 1999 to 2007 he was Director. In 2004, Unions 21 said that its role was to promote the union movement within government. Benn argued instead that "Unions 21 is not a trade union and its sole purpose is to encourage discussion and debate so it does not take a policy stance."[11] In February 2007, Benn was forced to resign after it emerged that Unions 21 had been given £20,000 of public money. This contravened Section 9.5 of the Ministerial Code drawn up by Tony Blair, which states that ministers are banned from supporting organisations or pressure groups that are "dependent in whole or in part on government funding".[12] Speaking to The Times on the 16th February 2007, Benn commented:

I was not aware until [yesterday] that Unions 21 had received a grant from the DTI. The grant was received in June last year, and would only be notified to directors as part of the annual accounts at the end of this financial year. However, having learnt today of the existence of this grant, I have taken the decision to stand down from my Unions 21 directorship.[13]

May 2007, Stake in United Business Media

In May 2007, it was reported that Benn owned a substantial stake - 28,605 shares, then valued at £233,559 - in international media and business information company United Business Media (UBM). One of UBM's biggest earners, PR Newswire, provides a press release distribution service and counted Benn's Department for International Development (DfID) and other government offices among its clients. Benn's UBM stake repeatedly failed to appear on Parliament's register of members' interests: it was declared in 2001, omitted in 2003 and 2004, but reappeared in December 2005.[14]

John Prescott announced that he would be standing down as Deputy Leader of the Labour Party at their annual Conference in September 2006. In a letter to his Leeds Central constituency association, Benn wrote that he would allow himself to be nominated for the role, saying:

The party will continue to need a deputy leader who offers honest advice and leadership, ensures the voice of the members and affiliated unions is heard in government, works with all colleagues and listens to their views... [The next deputy should carry forward] the fight for social justice and peace in the world, knowing that we achieve most when Labour works alongside the people.

He was then 3/1 favourite with bookmaker William Hill to take up the position,[15] but in June 2007 came fourth behind Harriet Harman, Alan Johnson and Jon Cruddas.[16]

Following the MPs' expenses scandal, "Bargain Benn" was charged only with being "very frugal indeed". The Guardian notes:

Although members can claim £400 a month for food – some MPs have apparently claimed the maximum every month – not so in the Benn household. Hilary Benn claimed only £147.78 a year in food... When all MPs' total expenditures are ranked, Benn's bill is the 15th least expensive for the taxpayer.[17]