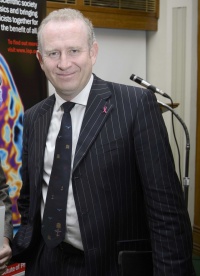 Since May 2015, Evans has been the parliamentary private secretary to the defence secretary Michael Fallon.[4]

Before he worked in politics Evans had a successful twenty year business career in manufacturing, working for companies such as BAE Systems and Hewlett Packard. [5]

Evans also spent four years as a special constable in the Cheshire constabulary and ten years as a local Councillor in Macclesfield. At Macclesfield borough council, he served on the community development committee. [5]

Evans attended Manchester University Business School where he gained a degree in business and a diploma in marketing management. [5]

In October 2015, responding to concerns from local constituents, Evans said 'there’s nothing new about fracking. If you look at the scientific reports they say it’s perfectly safe as long as it’s done professionally.' [6]

In November 2015, Evans assembled a panel of 'experts' and regulators for a question and answer session with residents over potential fracking in Helsby. The panel included John Blaymires, of IGas. [7] In January 2016, held a second Q&A on fracking in Frodsham, including representatives for IGas and the Environment Agency. [8]

‬Evans's constituency includes three oil and gas licence blocks, all awarded to INEOS by the Oil and Gas Authority under the 14th licensing round in 2015. There are plans for five shale wells, five hrz frac well and 2D and 3D seismic surveying. [9] From August to October 2015, IGas conducted seismic tests across Frodsham and Helsby.

Evans is a member of the All-Party Parliamentary Group on Shale Gas Regulation and Planning.

Evans has generally voted against increased regulations on fracking . [10]