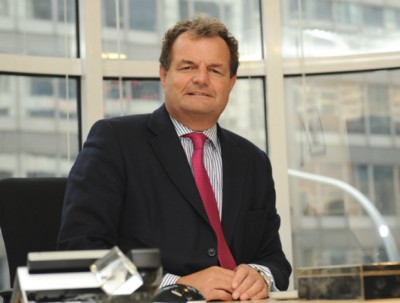 Major-General Graham Binns CBE DSO MC is a retired British Army officer best known for being the commander of the Desert Rats during the Iraq War.

Binns' last role before retiring after 35 years of public service was Commandant of the Joint Services’ Command and Staff College.

In June 2010 he was appointed the chief executive of the controversial private security firm Aegis Defence Services. This was considered a coup for Aegis, which has made millions from the wars in Iraq and Afghanistan since it was first set up in 2002[1] Aegis is now known as GardaWorld. Although he remains listed on Aegis' website as chief executive, Binns' LinkedIn profile also lists him as ‎senior managing director of strategy and sales for GardaWorld International Protective Services. [2]

A 2003 Ministry of Defence biography gave the following details of Binns' career:

Brigadier Graham Binns was commissioned into The Prince of Wales' Own Regiment of Yorkshire in 1977. Early regimental duties included service in Germany, Norway, and the UK. In 1988 he attended the Canadian Forces Command & Staff College in Toronto, then served as Chief of Staff of 39 Infantry Brigade in Northern Ireland. He returned to his regiment in 1992 to command a Warrior company, including a tour in Bosnia. He served at the US Infantry School at Fort Benning as an exchange officer in 1994, then returned to the UK as a Lieutenant Colonel to be a member of Directing Staff at the Army Staff College, Camberley. He commanded his battalion in 1997, taking the unit to exercise in Kenya, Belize and Canada, and on operations in Northern Ireland. He headed the team responsible for NATO operational planning in the Balkans, and served as Chief of Staff at HQ KFOR in Kosovo. He assumed command of 7 Armoured Brigade in January 2001.[3]

Binns commanded 7 Armoured Brigade during the advance into Basrah in the invasion of Iraq.[4]