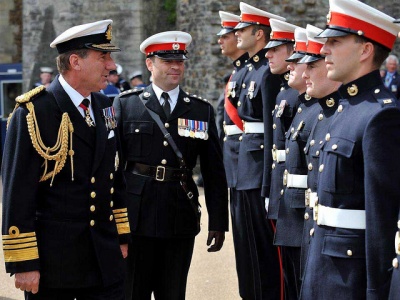 Admiral Sir George Zambellas is a former First Sea Lord and Chief of Staff of the Royal Navy. He retired in 2016.

After leaving the Navy he was appointed a senior advisory board member of Liquid Robotics in March 2017. It is owned by US arms firm Boeing.

In September 2017, Zambellas told The Sunday Times that Britain risked having a Third World military if it did not increase spending on equipment soon.

After 37 years of cuts, he said the Navy is 'at the bottom of the efficiency barrel and we all know that, because the Navy is so hollowed out'.

Zambellas questioned how much more the 'post-Brexit Navy' could be stretched in global waters.

'You either put more money in or you stop doing serious things and disappear into a Third World nation, security-wise, even though we are spending billions on defence'.

Zambellas recommended 12 hunter-killer submarines to protect the four submarines carrying the UK’s nuclear deterrent, but only three of the promised seven have been built. [1]

Zambellas gave a talk at the 2017 DSEI arms trade fair in his new post-military career role as a senior advisor to Liquid Robotics, which makes unmanned boats. The topic was n 'Changing perceptions in underwater defence and security: Respecting the march of technology'[2]

At the previous DSEI fair in 2015, Zambellas was a keynote speaker as the then First Sea Lord and Chief of Staff of the Royal Navy, reported The New Internationalist.

In that role, Zambellas pursued policies which benefited companies like Liquid Robotics, his new employer. According to a Royal Navy blog post, the October 2016 ‘Unmanned Warrior’ exercise, which tested how robot boats could be used in the Navy, was the ‘brainchild’ of Zambellas. One of the companies involved in this exercise, was Liquid Robotics, who Zambellas joined in March 2017, just six months after leaving the Royal Navy and four months after the ‘Unmanned Warrior’ exercise." [3]