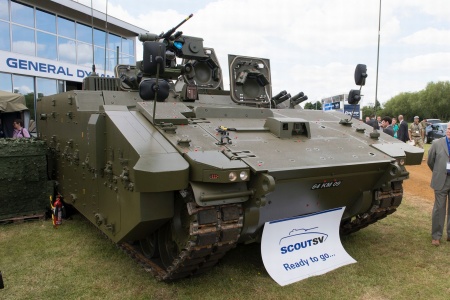 The first prototype of General Dynamics' Scout SV on show for the first time in June 2014. Source: Wales Online

General Dynamics (GD) is an American-headquartered aerospace and defence multinational company. Its business is spread across a range of areas: business aviation; combat vehicles, weapons systems and munitions; C4ISR and IT solutions; and shipbuilding.

GD ranks among the top five weapons producers worldwide according to SIPRI's analysis in 2016.

The chairman of General Dynamics UK is Lord Peter Levene, a former adviser to Michael Heseltine during his years as a Conservative defence minister in the eighties.

In December 2016 it also appointed the former head of the British Army, Sir Peter Wall as a director.

The company is currently working on the Future Rapid Effects System (FRES), the UK’s next generation of armoured vehicles.

General Dynamics was a 'platinum sponsor' of the 2017 DSEI arms fair.

General Sir Peter Wall, the former UK Chief of the General Staff, was appointed a non-executive director of General Dynamics Corporation in August 2016.

At the time, GD had a large number of live and closed contracts with the UK MOD, including a significant contract for Scout specialist vehicles.[1]

Noting both the contracts and the fact that Sir Peter 'had had official dealings with GD and its competitors during its last two years of service', the prime minister's Advisory Committee on Business Appointments(ACOBA) said that it had discussed whether it should recommend the position as 'unsuitable'.

Ultimately, however, ACOBA concluded 'that there was no reason why Sir Peter should not take up this appointment' if he were to respect a waiting period of 18 months before 'personally lobbying the UK Government, including the MOD and the Armed Forces, either formally or informally on behalf of General Dynamics Corporation, its subsidiaries or clients' and if he did 'not have any involvement with matters relating to the Scout contract'. [2]

It should be noted that if ACOBA had deemed the position as unsuitable, we would most likely not ever have known, as ACOBA does not publicise such rulings.

According to Campaign Against the Arms Trade, Wall met twice with General Dynamics while working for the MOD. [3]

In March 2018, the UK's defence secretary Gavin Williamson announced the MOD had signed a contract to spend almost £4million with Thales and General Dynamics Land Systems-UK to deliver a vehicle-mounted acoustic shot detection system, named the Acusonic sensor, which can sense and report the direction of incoming enemy fire. [4]