Gardant Communications was a public relations and lobbying consultancy based in London, renamed in 2013 as Meade Hall & Associates, which is run by Gardant co-founder and former Conservative Party adviser Paddy Clanwilliam aka Paddy Gilford and Earl Clanwilliam. 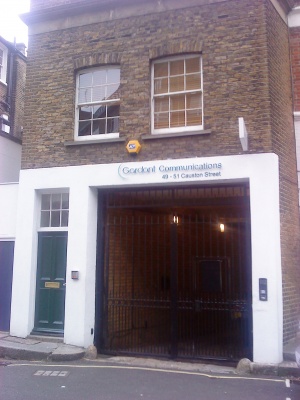 The Policy Partnership included amongst its clients the Russian oil firm Yukos and the right wing Inkhata Freedom Party.

It employed parliamentarians and elected officials such as Lord Gillford, who was latterly appointed to the board of Yukos and Charles Napier who is a London Councillor.

In February 2011 Gardant Communications co-hosted with the Conservative Friends of Nuclear Energy, a reception in the House of Commons titled: 'The Electricity Market Reform: Implications for nuclear power generation'. According to Claire Davidson, Managing Partner of Gardant:

Charles Hendry welcomed the coming together of representatives of the Trade Union movement and the Conservative Party, and noted there was much common ground. His focus since being appointed Energy minister has been to identify, and then remove, the barriers to new nuclear power stations. New stations were "vital to energy security", he noted, and "critical for new high-value jobs".

"A significant investment was needed in skills and this would benefit both the domestic and potential export markets", the Minister went on to say. "The industry still has many issues to address including planning and reprocessing, but the immediate focus must be on financing - hence the importance of the ongoing Electricity Market Reform (EMR) consultation." He concluded with a clear statement about the key role new nuclear stations will play in support of economic recovery and energy security.

...Both Charles and Dougie then spent a generous amount of their time engaging the reception attendees in lengthy and wide-ranging discussions. [2]

(for whom UK PA consultancy services provided this quarter)

(for whom only UK monitoring services provided this quarter)