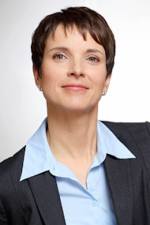 Frauke Petry was one of three leaders of the German Euro-sceptic party Alternative for Germany (Alternativ für Deutschland) (AfD) as of January 2015.[1]

In July 2015 Petry was elected party leader. Her appointment was viewed as a shift to the right, and five MEPs quit the party in protest. Party co-founder Bernd Lucke cited 'a rise of xenophobic sentiment in the AfD', and announced he was leaving to form a new party, the Alliance for Progress and Renewal.

Petry's leadership has resulted in closer links to Pegida:

In the past AfD has tried to distance itself from the anti-immigrant, anti-Islamic campaign group Patriotic Europeans against the Islamisation of the Occident (Pegida) which, like Petry, originated in Dresden. But increasingly her party is being talked about as the political arm of Pegida. Petry has done little to persuade anyone otherwise. [2]

Petry was born in Dresden in the days of the communist East. She left for the west at 14 – just months before the fall of the Berlin Wall – after her father, who had spent a decade trying to plot the family’s escape, managed to obtain an official tourist visa for himself, and then got permission for his wife and two daughters to follow. Petry did a chemistry degree at Reading University, spending three years in the city. Like Merkel, she gave up her scientific career to pursue politics, relinquishing control of the Leipzig company she set up nine years ago to manufacture environmentally friendly polyurethanes, for which she holds a joint patent with her mother. [2]

She left her husband, a Lutheran pastor for the AfD’s representative in the European parliament, MEP Marcus Pretzell, himself a father of four, who has advocated forming closer ties with France’s Front National. Pretzell has since left the AfD for Merkel’s Christian Democrats. Despite that move, there have been suggestions that he is responsible for Petry feeling increasingly comfortable about keeping the party on a rightwing populist course. [3]

Petry has appeared numerous times in the press since her party gained popularity in 2015. Her own party has frequently used her image as youthful and motherly to contrast with Merkel’s harder one. The party’s unofficial organ, Compact, is filled articles praising her persona and looks. [4] 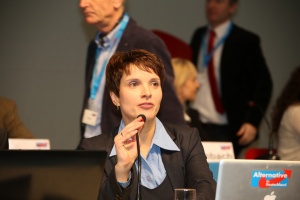 Petry at the party congress 01/25/2014 in Aschaffenburg. Credit: Metropolico.org staff

She appeared to praise Donald Trump in an interview, calling him a 'refreshingly alternative apparition', who represented a new style of politics. In the follow-up to her interview, she stated that, whilst she sometimes did not like what he said, he was 'refreshing in a way that shows how [similar] the others are.' [5]

In February 2016 Petry attracted wide condemnation after remarking that refugees should be shot at Germany's borders. Newspapers widely reported it, and even the party’s unofficial organ, Compact, said Petry had not tried to withdraw the statement 'perhaps because she recognises that 25% of Germans are in favour of deploying firearms, even on unarmed refugees' [6]. For two days she failed to respond to her critics.

Deputy AfD head and MEP Beatrix von Storch then answered 'yes' to a question on Facebook as to whether firearms should be used against women and children trying to cross the German border, raising criticisms towards the party once more. Von Storch – whose grandfather served as finance minister under Hitler – afterwards suggested her computer mouse had slipped [7]. Petry later tried to claim the press had lied about this, however an audio-recording of the interview in which she had said this was released by Rhein-Zeitung. [8]

Remarks on the reintroduction of 'voelkisch'

Fauke Petry had previously distanced herself from Vice-Chairman Gauland's statements in February 2016 that were read as racist [9], but her September 2016 interview with "Die Welt" may have opened her up to accusations of racism - perhaps even from within her own party.

In this interview she called for a racially charged term, 'voelkisch', to be rehabilitated. "It's unacceptable to reduce the word 'völkisch' to 'racist,'" Petry said. 'I myself don't use the term, but I have a problem with the negative connotations of the concept 'völkisch' being extended to the word 'Volk.' We need to work on giving the concept positive connotations.' Duden, the German dictionary of record, defines 'völkisch' as follows: '1. (National Socialist) (in the ideology of National Socialism), concerning a people as a purported race; of or belonging to a people as a purported race 2. (obsolete) national.' [10] It was frequently used by the Nazis during the third Reich— their party paper was called Voelkischer Beobachter. [11] [12] With the rise of ethnocentric political movements, the word had quickly taken on racial connotations by the late 19th century.

The day of the interview, the editor-in-chief of Die Welt, Ulf Porschardt, tweeted that the AfD's press secretary had wanted to withdraw the interview but that Petry had refused, but did not state the reasons why. Petry's flirting with such vocabulary could be interpreted as an attempt to appeal to voters on the extreme right of the political spectrum. Kai Biermann wrote in the online edition of the weekly newspaper Die Zeit: 'It's an attempt to portray fascist ideas as one opinion among many. It's an overture to the extreme right.' During the same interview she warned of a possible 'civil war' in Germany if the alleged negative effects of immigration continue; vocabulary used by extreme-right factions such as PEGIDA, Britain First and Generation Identitaire.

Comparing a diverse society to a 'compost heap'

In an October 2016 speech, she compared a society incorporating migrants to a 'compost heap'. In her own words: 'What should we make of the campaign "Germany is Colorful"? A compost heap is colorful, too'. During that same speech she gave in Stuttgart, she argued against the notion of a 'colorful' Germany, wanting a more 'homogenous' nation instead. In the previous month she had caused outrage by saying German Chancellor Angela Merkel was a bad politician because she does not have any children. [13] 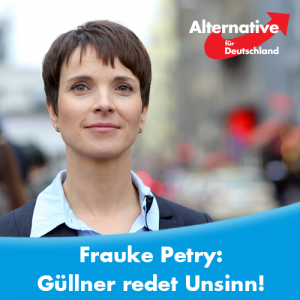 2016 Advertisement poster that reads: Güllner is speaking nonsense! (Manfred Güllner, the chief pollster of Forsa, believes it is unlikely that AfD will get much bigger or stand much longer). Retrieved from Petry's Facebook page.

Brenna Daldorph from France 24 claims that her controversies 'are not gaffes made in the heat of the moment.' [14]

Some have compared her use of controversial statements to foster her presence in the media to Donald Trump's strategy. Indeed, dismissing 'outrageous' voices as unrepresentative seems to be her main strategy when dealing with AfD’s 'slip-ups', like Björn Höcke, the AfD's leader in the eastern state of Thuringia, who has echoed Adolf Hitler in calling for a 'thousand-year' Germany and made pronouncements on what he calls the differing 'reproduction strategies' of European and African people. She denied the charge that she cynically makes political profit from pandering to her party’s darker side, even as she officially condemns it, yet despite her condemnation Mr Höcke remains in his post, and the polls appear to be more and more favourable to the party. [15]

She even justified the use of provocation by claiming that without it, no attention would be paid to her party:

'Well, sometimes, I don’t deny, we think we have to use provocative arguments in order to be heard,”. She added: “because we tried very hard at the beginning of 2013 to be heard with lots of very sensible thinking and arguments, and we simply couldn’t get through to anyone. So what do you do? You put forward a provocative argument, and sometimes you are given the chance to explain what you meant. I know it’s a difficult choice to make but sometimes, for us, it feels like the only way.' [3]

She added, in the same interview, a criticism towards 'politically correct' culture, perhaps to morally justify her use of this strategy:

'[T]he idea of controversy as a normal element of free society has got lost, and the fight between the political left and right is always being defined as a fight between the morally good and morally bad. I find that appalling.' [3]

She admitted being on an offensive to project a different image of herself in the media but called it 'not a strategy as such', saying 'I think it’s necessary for people to get to know our human side'. [2] She even gave a long-winded interview in the gossip magazine Bunte in which her and Pretzell answered personal as well as more political questions in a homely and casual setting. [16]

Some of the press seems to have engaged almost positively with her. In an interview, The Guardian called her 'the smiling face of Germany's resurgent Right'. [3] Most of the press however, continues to dismiss her party as unacceptable or indecent. The Telegraph claims that Mrs Petry sees this as the refusal of the political elite to recognise the legitimate concerns of traditional-minded, older, whiter, blue-colllar Germany. She argues that it is the liberals who are being illiberal – a trick also used by Donald Trump, who like her courts and berates the media in equal measure. [15]

She often refers to the media as 'Pinocchio press', and sees herself as a victim of its attempt to 'put us into the brown [Nazi] camp right from the start', [5] which could remind one of the term "Lügenpresse" (lying press) used by PEGIDA and condemned by the government-sponsored German-language society GfdS for its association with racism and National Socialism. [17] Both PEGIDA and Petry also use the term 'traitor' to refer to Merkel and other supporters of her asylum policy. [3]