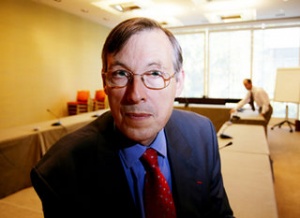 Professor François Heisbourg is Chairman of the International Institute for Strategic Studies and of the Geneva Centre for Security Policy.

Senior Advisor (1978-79), and then director of Fondation pour la Recherche Stratégique, (May 2001-2005): Member of the French Foreign Ministry's Policy Planning Staff (Centre d'analyse et de Prévision), in charge of nuclear non-proliferation issues. 1979-81: First Secretary at the French Permanent Mission to the U.N. (New-York), dealing with international security and disarmament issues. 1981-84: International security adviser to the French Minister of Defence. Founding-member of the French-German Commission on Security and Defence 1984-87: Vice-President at Thomson-CSF, in charge of European and Euro-American cooperation, 1987-92: Council of the International Institute for Strategic Studies (IISS), since 2001. 1992-98: Senior Vice-President (Strategic development), MATRA-Défense-Espace, subsequently: Special Advisor, Fondation pour la Recherche Stratégique, Paris (since May 2005); Member of the French Government’s Steering Committee for the White Paper on Terrorism (2005-2006); Member of the French "Defence White Paper" Presidential Commission (2007-2008); of the International Commission on the Balkans (2004-2006); Member of the European Commission’s Group of Personalities on Security R & D (2003-2004); Professor at Sciences-Po Paris (1999-2001); Head of interagency working group (groupe de travail interministériel) on the study of international relations, strategic affairs and defence issues in France (1999-2000); Chairman, Foundation Council of the Geneva Centre for Security Policy (since December 1998). He is also a Board member of the Aspen Institute Berlin the Centre for European Reform in the UK and the French think tank Telos with fellow CER director Pascal Lamy and Anthony Giddens.[1]

He is the author of several works including (2007) Iran, Le Choix des Armes, reviewed in Forbes magazine with:

Want to know how a U.S. strike on a newly nuclearized Iran might actually work? Turn to page 154 of Francois Heisbourg's extraordinary new book, Iran, the Choice of Arms, published in Paris but, alas, not yet in the English-speaking world. It's frightening, but as accurate as only an insider's insider can possibly be--down to the actual weapons America might launch and their impact on the military machine and civilian infrastructure and population of the nation that is perhaps the world's most dangerous and unpredictable power.[3]

This mirrors his January 1998 article for Prospect magazine.[4]Other written works include:

Heisbourg has attended several Seminar sessions both as a fellow and as a faculty member and is a Senior Fellow of the Salzburg Global Seminar’s Board of Directors, a positio he shares with David Hannay also of the Centre for European Reform (CER).[6]He shares his position on Advisory Board of the International Institute for Strategic Studies with fellow CER member Baroness Pauline Neville-Jones, Lord Powell of Bayswater, Sir David Manning and others. Heisbourg's membership of the International Commission on the Balkans was also shared with the CER's Carl Bildt and Pauline Neville-Jones.