Pascal Lamy is Director General of the World Trade Organisation and a former European Commissioner. Previously, he was the Trade Commissioner of the European Union in Brussels from 1999 to 2004. From 1994 until 1999, he served as Director-General of the team responsible for restructuring Credit Lyonnaise.[1]

He began his career in the civil service at the French Finance Ministry, the Inspection Générale des Finances, and the Treasury Department, later becoming adviser to Economics and Finance Minister, Jacques Delors, and to Prime Minister Pierre Mauroy. From 1984 to 1994, Lamy worked in Brussels as chief of staff to Commission President, Jacques Delors. A member of the French Socialist Party, Lamy is also politically active in the Mouvement Europeen - the European Movement - and Friends of Europe. 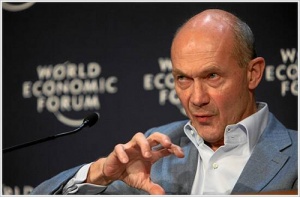 In 1999, he was the recipient of the Officier de la Legion d’Honneur and has been honored with several international orders of merit. Lamy’s academic credits include degrees from L’Ecole des Hautes Etudes Commerciales (HEC), the Paris Institute of Political Studies, and L’Ecole Nationale d’Administration (ENA).

After his tenure in Brussels, Lamy spent a short sabbatical period as President of Notre Europe, a think tank working on European integration, as associate Professor at the l’Institut d’études politiques in Paris and as advisor to Poul Nyrup Rasmussen (President of the European Socialist Party). He is also a member of the Centre for European Reform.[2]

A case of double revolving doors

Pascal Lamy was Chief of Staff for Jacques Delors' cabinet when Delors was President of the European Commission (1984-1994). When Lamy left this post he became an advisor and CEO of Credit Lyonnaise Bank from 1995 until 1999. During his time at Credit Lyonnaise Lamy oversaw the restructuring and privatisation of the bank. In 1999 he returned to European Union politics and became EU Commissioner for Trade. In 2004 he left this position and became the Secretary General of the World Trade Organisation where he currently remains.[3]