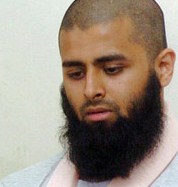 Abdul Kahar Kalam who was shot by police during the raid

The Forest Gate Raid (codenamed Operation Volga) was a counter-terrorism operation conducted on a house in Forest Gate, London, at 4am on 2 June 2006 on suspicion that a chemical weapon was being produced by two brothers – Abdul Koyair and Abdul Kahar Kalam. The latter was shot by police during the raid.

Security sources stated the operation was based on "intelligence" that indicated a “viable” chemical device with the potential of producing casualties “in double or even triple figures” was present at the house. This was the official reason for the operation.[1]

The Sun newspaper quoted a 'senior security official' as stating: "We are absolutely certain this device exists and could be used either by a suicide bomber or in a remote-controlled explosion.[2]

No chemical weapon was ever found and both men were released without charge after 8 days detention.

The raid was carried out by approximately 250-300 police officers, including armed police officers. They were backed up by fire-fighters, health officials and biochemical experts from the MoD biological warfare research centre at Porton Down.[4] Porton Down members swept the house and ensured it was safe from any chemical or biological dangers.[5]

During the raid and investigation, an air exclusion zone was imposed around the scene, banning aircraft flying below 2,500 feet above the house of the two brothers.[1] However local residents were not evacuated from their homes because, as the BBC reported, "the threat of explosions was not deemed serious enough or [the] police did not want to alert the suspects".[1]

Peter Clarke, Deputy Assistant Commissioner of the Metropolitan Police Service and commander of SO15 stated that the operation was based on “specific intelligence”.[1]

Initial media reports suggested that the intelligence regarding the operation had emerged from “foreign sources” and had been received by the intelligence services (MI6). [6] The press then reported that the information was in fact supplied by an associate of the two brothers (Abu Bakr Mansha) who was alleged to be an MI5 informant. His MI5 handler told the press that he had “checked out his [Abu Bakr Mansha's] story as ‘plausible’”.[6] The Daily Mail reported that the Mansha had himself claimed to have seen the device". [4]

Abu Bakr Mansha, himself convicted of plotting to kill a British soldier in January 2006, denied providing intelligence to the police. His lawyer, Sara O'Keefe stated that the police had indeed visited Mansha in prison but argued that "this was not his choice and he gave them no intelligence or information."[7]

The claim that Abu Bakar Mansha was an MI5 informant was contradicted when the Guardian reported Mansha had in fact been supplying information to the police and not to MI5 “about the activities of alleged Islamist militants for several weeks."[8] In other words, the Guardian was suggesting that the intelligence leading to the raid had not been provided to MI5 as initially reported but was provided to police. The Guardian stated that the police then handed the intelligence to MI5 and asked them to assess it. This eventually led MI5 and the police to jointly agree that the intelligence and information "was specific and credible” enough and had to be acted upon immediately.[8]

As the investigation and the search for the non-existent chemical weapon was going on, the Guardian reported that senior security officials were stating that they believed the intelligence regarding the operation "was wrong".[8]

An unnamed counter-terrorism official, who had initially stated that the police had acted "correctly" on the intelligence that was received, added: "there is no viable device at that house. There is no device being constructed, or chemicals [present]. There does not appear to be anything there or anywhere else."[8]

Speaking in the context of the Forest Gate raid, a series of unnamed intelligence and counter-terrorism officials stated that "If there was an immediate risk to public safety, there would not have been time to bug the house ... If the intelligence was right [then] there was a serious risk to the public. We did not know if it was right or not until we went in ... Intelligence is patchy. Even if it suggests a 5% likelihood of something nasty, we can't take that risk".[8]

Andy Hayman, who initially refused to issue an apology for the operation but later did, said the officers had "no choice" [but to act on the information they had received] ... The ideal situation is you have as much time as you possibly can to get the richest of pictures ... the dilemma is in receiving information that is so specific and of a nature that starts to put public safety into question, there is no real decision to be made. You have got to take public safety as an overriding priority. If you chose not to do that and heaven forbid it was a wrong decision and there was some device or whatever else, you would never be able to live with yourself, that you shied away from deciding to intervene."[8]

The initial line that was advanced in the press and media was based around a struggle ensuing between the Police and Abdul Kahar Kalam. Immediately after the incident, the Independent Police Complaints Commission (IPCC) stated they would launch an independent investigation into what had actually happened. Abdul Kahar Kalam stated he was shot without warning or signal. His lawyer stated: "He was not asked to freeze, given any warning and did not know the people in his house were police officers until after he was shot".[9]

"I assumed a robbery was happening, so I went down, I was coming towards the passageway and I think at that time my brother was right behind me, he was still screaming. As I took the first step down the stairs, I turned around to look at what was down the stairs. As soon as I turn around I just see an orange spark and a big bang. At that time I flew into the wall. As I flew into the wall, I slipped down. As I slipped down, I was on the floor. I look to my right, on my chest I see blood coming down my chest and I see a hole in my chest. At that moment, I knew I was shot, but the first thing I was thinking is that there's an armed robbery taking place". [10]

The Times reported that the officer who had fired the shot (known only as B6):

“… went up the stairs in the house he shouted "armed police", but the respirator could have muffled his voice. He reached the half-landing and … was aware of two figures approaching at speed. B6 state[d] that he and the two figures came into contact and this caused him to lose his balance and come into contact with the wall … he felt his right arm being pulled and was afraid someone was trying to take his gun … He then heard a pop but did not realise [he had fired a] shot.[11] 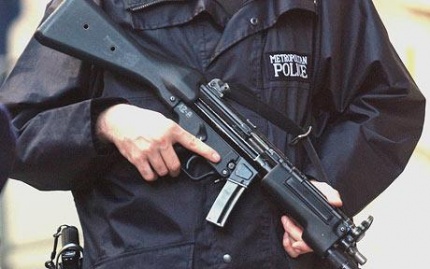 Metropolitan Police officer with a Heckler and Koch MP5 Carbine Sub-Machine Gun that was used in the Forest Gate raid.[12]

The IPCC report which investigated the raid stated that there was “no evidence to support claims that … the officer (B6) had fired [his gun] deliberately”.[11] However, B6 did not get questioned or interviewed by the IPCC for the investigation. The officer(s), contrary to normal procedures, wrote statements about what had occurred and submitted them to the IPCC instead.[11]

The IPCC eventually ruled that there was “no evidence” of “intent or recklessness” and stated that they were satisfied that “no offence was committed in the firing of the weapon”, which is why the case was not referred to the Crown Prosecution Service (CPS) for criminal charges.[12] The IPCC stated that even though there was evidence of grievous bodily harm (gbh), the intent could not be established. They also stated that there was “little doubt that the bulky clothing and gloves had an effect on the officer’s mobility and dexterity and that the respirator muffled sound”.[12] Officer B6 continues in his role as an armed police officer and has not faced any disciplinary actions.

The News of the World broke the story initially and stated that contrary to initial reports, the shot was not fired by a police officer, but was fired by one of the brothers as they scuffled to try and snatch the weapon from the officer's hand. They also stated that the “trajectory of the bullet indicated that the officer did NOT pull the trigger”. (original emphasis). [13] In the article, a "highly-placed Whitehall source" stated that "we understand the officers are adamant that they did not pull the trigger and have told bosses at Scotland Yard the DNA evidence will prove this.” [14]

The head of the IPCC, Deborah Glass who oversaw the investigation said that there was no evidence to support the claims that one of the brothers had fired the gun.[12]

Abdul Kahar Kalam who was shot during the raid was re-arrested on 3 August 2006 on suspicion of possessing child pornography. The police found indecent images of children on a Dell computer, an external hard-drive and mobile phones that were seized in the initial counter-terrorism operation. He was questioned by the Specialist Child-Abuse Unit, but denied the claims in the strongest possible terms.[11]

He was released without any charge. The Crown Prosecution Service stated that the 44 images that had been discovered in the memories of the Dell computer, an external hard-drive and various mobile phones, 23 of them were embedded images which were most likely to have been inadvertently downloaded, whilst the remaining 21 on the external hard-drive and mobile phone had been deleted very quickly, which is a recognised defence in a court.[15]