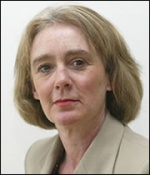 Elaine Murray was first elected as Labour MSP for Dumfries constituency in 1999. She was re-elected for the new Dumfriesshire constituency in 2011. Before becoming an MSP she was a research scientist, an assistant to a member of the European Parliament and an associate lecturer for the Open University. [1]

Murray's constituency includes the Chapelcross nuclear plant that is now being decommissioned.

She listed in her register of interests a "Donation of £500 received from the TGWU in relation to election expenses (value less than 25% of those election expenses).[2] The TGWU, among others, is running a campaign for a new nuclear plant at Chapelcross, called Chapelcross II.

Along with the pro-nuclear Conservative MP David Mundell, she is one of two MSPs singled out by the TGWU's John Rogerson, a shop steward from the Chapelcross plant for helping "the Campaign for Chapelcross II" during a debate at Holyrood on 4th November 2004.[3] Murray organised for a delegation from Chapelcross to meet with Allan Wilson, the Deputy Minister for Enterprise and Lifelong Learning at the Scottish Parliament before the event. They lobbbied for a new nuclear power plant at Chapelcross.

According to Murray, the Minister was "impressed by the case made for Chapelcross II, and I am sure he will raise this with colleagues in the Scottish Executive and in the UK government."[4][5]

She is the Secretary of the Cross Party Group on the Civil Nuclear Industry that has been accused of violating anti-sleaze rules and being pro-nuclear.

Although Murray says she is in "favour of expanding the supply of energy through renewable sources such as wind, solar and wave power" in April 2004, she wrote to Dumfries and Galloway Council and the Scottish Executive opposing Scottish Power's proposals to site wind turbines in the Ae forest.

"I honestly do not believe that a heavy reliance on wind power can fulfil the UK or Scotland's future energy needs." said Murray. "If we do not want to rely on energy sources which produce greenhouse gases, I believe we must give serious consideration to the development of second generation nuclear power stations. I appreciate that my views on nuclear power may be controversial, but Chapelcross power station has operated safely for over forty years and there is no comparison between its visual impact and that of 94 giant wind turbines. The new nuclear power stations produce far less radioactive waste than the older ones such as Chapelcross, and most of that which is produced is low level with a small percentage being medium level waste."[6]