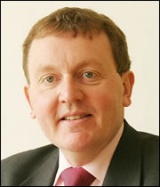 David Mundell is the pro-nuclear Conservative Party MP for Dumfriesshire, Clydesdale and Tweeddale, whose constituency includes the Chapelcross nuclear plant.

The only Conservative MP in Scotland, he was appointed the secretary of state for Scotland after the May 2015 general election.[1]

Mundell is a long-standing advocate for a new nuclear power station at Chapelcross to replace the one currently being decommissioned. In November 2004, whilst still an MSP, Mundell secured a "members' business debate" in the Scottish Parliament on Chapelcross, to which Chapelcross's shop steward, John Rogerson from the TGWU attended. Rogerson highlighted the help of Mundell and Scottish MSP Elaine Murray in assisting the Chapelcross campaign.

According to Rogerson during the debate, Mundell said he "welcomed" the campaign by the nUKlear21 workers' group "because I believe that it can make the idea of a new nuclear power station in Chapelcross a reality." [2]

Just over a year later, having become an MP in London, Mundell "welcomed Chapelcross nuclear campaigner John Rogerson" to Westminster to lobby MPs over nuclear. Said Mundell: "I hope that as this review gets under way Scottish Labour have not ruled anything out when it comes to its energy policy. I also hope they will conclude that a new generation of nuclear power stations is the best way to ensure Scotland has an energy supply fit for the 21st century." [3]

When the energy review was officially launched at the end of January, Mundell "welcomed" the review "as another opportunity to make the case for a new nuclear power station at Chapelcross."[4]

In March 2006, Mundell again welcomed Rogerson and the Nuclear Workers Campaign to Parliament for a rally and to lobby MPs. "I'm very much looking forward to welcoming the Nuclear Workers" Campaign to Parliament as it is extremely important that the Government realises just how much demand there is for a new generation of nuclear power stations in Scotland and across the UK and particularly locally for a Chapelcross 2".

"The area benefited enormously from having the Chapelcross plant for more than 50 years, which at the end of its life was bringing in £20m to the local economy and employing hundreds of people". [5]