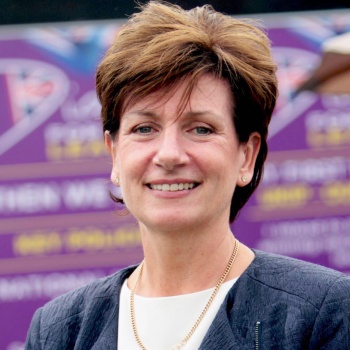 Before entering politics she enjoyed a 30-year career in the healthcare sector and set up her own international consultancy firm focusing on the health care sector. [3]

She ran as an independent in a council by-election in her home village of Yewhurst, Surrey in 2006, winning the long-standing Conservative Party seat. She was re-elected in 2011 and announced she was joining UKIP shortly after the 2011 election, but refused to stand down and fight a by-election [3]. She lost her seat in 2015 after standing as the UKIP candidate in the election [4].

In 2013 she rose to national prominence after finishing second in the Eastleigh by-election, during which she called for a temporary ban on all immigration to prevent 'crime associated with Romanians'. She later apologised for her comments, and said she had not meant to 'generalise against every single individual born with a Romanian passport'. [3]

She was elected to the European Parliament in June 2014.

In December 2014, James was selected by North West Hampshire UKIP to be its candidate for MP. However, a few hours after making a speech at the UKIP Spring Conference in Margate, Kent, she stepped down from the Westminster candidacy 'for personal reasons'. [5]

She was ally of former leader Nigel Farage, and was elected as UKIP new leader on 16 September 2016.Allies of Farage, including the influential donor and Brexit campaigner Arron Banks, had backed her. During her inaugural speech, she said her leadership would focus on ensuring Brexit was delivered. 'Until that ink is dry, we’re still in,' adding 'we’ve only just won a heat, a heat in a 28 member states Olympics competition to leave the European Union.'

She also issued a warning to the PM, whom she called 'magpie May', claiming she had stolen UKIP policies, including backing for new grammar schools. She addressed her, saying:

'When you try and bury UKIP, when you throw everything at us…just remember where the best ideas that you steal where they came from and in all likelihood where they will come from again in the future.' [6]

James explained that despite her support from party members she was not backed by colleagues. She will however, continue as a UKIP MEP for South East England.

'It has become clear I do not have sufficient authority, nor the full support of MEP colleagues and party officers to implement the changes I believe are necessary and upon which I based my campaign.'[7]

Contenders to replace James include Raheem Kassam, the former chief of staff to Nigel Farage, who has confirmed he will run for the leadership.[7]

'He has issues with the way the EU encouraged a change of government in the Ukraine which he thought put at risk and put in danger the Russian population in that country.' [8]