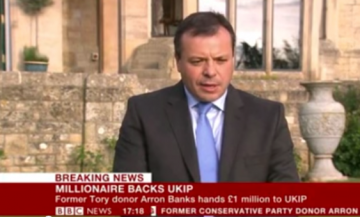 Arron Banks at a press conference with the BBC announcing his donation to UKIP, 1 October 2014

Arron Banks is a multimillionaire Brexit donor and businessman.

Banks was the single biggest donor to the Brexit campaign.

Bank’s post-referendum plans are reportedly to turn Leave.EU’s supporters into an online “people’s movement', akin to “a rightwing Momentum”, according to Banks in reference to the leftwing grassroots movement group.

Following the EU referendum, Banks also announced that he is looking to forge a new political party which would take in Brexit-voting members of Ukip, Labour and the Conservatives, adding that 'Ukip needs to be reformed root and branch'. 'Ukip grew so rapidly it had problems with personnel and all sorts of issues and I believe that could be better tackled with a new party, he said.[1]

Banks was the single biggest donor to the Brexit campaign. He reportedly spent £9.6 million of his personal fortune funding the organisations which arguably clinched Brexit.

Banks was the largest donor to the pro-Brexit group Leave.EU, which he co-founded and chaired. Banks gave three loans totalling £6 million on non-commercial terms to Leave.EU.

According to the Guardian, Banks also 'deployed senior executives and staff from his insurance companies and hired the Washington DC political campaign strategy firm Goddard Gunster on a multimillion-pound fee to sharpen [the campaign's] message'. Banks said, "What [Goddard Gunster] said early on was 'facts don’t work' and that's it. The remain campaign featured fact, fact, fact, fact, fact. It just doesn’t work. You have got to connect with people emotionally. It’s the Trump success.'[2]

Banks also contributed to a number of other groups campaigning for the UK to leave the EU through Better for the Country Ltd.

Better for the Country Ltd is company founded in 2015, of which Banks is a director, that made donations totalling £2.3 million to five separate registered campaigners during the referendum campaign. Its board includes, as well as Banks: Andrew Wigmore, Elizabeth Bilney, Alison Marshall. All four directors were also trustees of Banks’ charity, the Love Saves the Day Foundation (since wound up in the midst of an investigation by the Charity Commission).[3].

Better for the Country made donations to:

In 2017 the Electoral Commission announced it was investigating claims that Banks and/or Better for the Country Ltd breached campaign finance rules during the EU referendum.[5]

As the Times reported in Nov 2017 ’Better for the Country Limited, a company of which Mr Banks was a director, is at the centre of the investigation. [The Electoral Commission] will examine whether the company... was the true source of donations made in its name or whether it acted as an agent.’[6]

Or, as openDemocracy's Adam Ramsay puts it: 'The Commission is asking, in other words, if this cash really all came from Arron Banks, or if that’s a cover for some other, secret source.'[7]

Banks has called the Electoral Commission a 'swamp creature' that is packed with pro-Remain figures.[8]

Banks was a prominent donor to UKIP.

He switched his allegiance from the Conservative Party to UKIP in 2014. Banks said he defected to UKIP because he agreed with its policies and its view that 'Europe is holding the UK back' as it's a 'closed shop for bankrupt countries'.[9][10]

In 2014 it was reported that Banks was funding a website called LibLabCon, dedicated to attacking the three major parties. The domain of the website was reportedly registered to Banks at the address of his firm, GoSkippy in Bristol. UKIP told the Daily Mail the website is not linked to them but is funded by one of their main backers.[11]

Until 2014 Banks was a member of the Conservative Party and a modest donor.

A spokesman for UKIP’s Nigel Farage said that Banks had funded the Chipping Sodbury office for the South Gloucestershire Conservatives 'to the tune of £250,000'. However, a Conservative spokesperson said the support was 'nothing like the order of magnitude' of sums claimed by UKIP and estimated that the donations were about £22,000.[10] A Ukip source said that he had also loaned £75,417 to Thornbury and Yate Conservative party via his former company Panacea Finance in September 2007, to be paid back by 2022. However, Companies House records show that Banks resigned from the company in September 2005, 'raising questions over whether he was controlling the firm at the time, or whether he was using the firm as a “proxy donor"'.[12]

Upon Bank's defection to UKIP, Conservative MP William Hague called him 'somebody we haven't heard of'. In response, Banks said he was going to up his donation from £100,000 to £1million, claiming he did not like being called Mr Nobody.[9]

Banks is a shareholder in at least 20 UK registered companies. According to the FT, almost all of their parent companies are offshore in the Isle of Man, Gibraltar and the British Virgin Islands. His interests worldwide include insurance, banking, diamond mining and political consultancy.

In June 2017, the FT conducted an investigation into Banks’ overlapping business interests. [13]

The FT also notes that ‘over the years [Banks] has built stakes in an offshore bank, a provider of trustees to high net worth individuals, and — through Southern Rock Insurance — even uranium mining in Niger. More recently, he has taken shares in a sports consultancy.[15]

However, a lengthy investigation for the website openDemocracy questions Banks' financial worth. The report's authors, Alastair Sloan and Iain Campbell, for example, highlight that in 2013, regulators in Gibraltar discovered that Banks’s insurance business had reserves far below what it needed. Yet a year later the apparently embattled Banks was still able to pour money into the propaganda campaigns that took us out of the EU. How did he afford it?[17]

The editor of the Financial Times, Lionel Barber, raised the same question after the paper investigated Banks’s real worth. Barber asked on Twitter: “How rich is he really?” Banks' reply: “I founded and sold a listed insurance business for £145m! Not even mentioned – no FT, fake news.”[18]

After his defection and donation to UKIP, Banks faced criticism for basing his business interests in tax havens, such as Gibraltar, and thereby avoiding UK tax laws. To counter these accusations, he released evidence that he paid £1.86million in British tax in 2013-2014.

One of the businesses in question was Rock Services Ltd, of which Banks is a director. It had a turnover of £19.7m in 2013 and paid corporation tax of £12,000. The company deducted £19.6m in 'administrative expenses'.

When asked if his companies pay full corporation tax, he said: 'I paid over £2.5m of income tax last year [2013] so I’m not going to get knocked on that one, thank you very much. I really resented that, by the way. My insurance business, like a lot of them, is based in Gibraltar but I’ve got UK businesses as well that deal with customers and pay tax like everyone else.'

Charlie Elphicke, a Conservative MP and former tax lawyer, replied by saying: ‘Everyone knows that companies in tax havens like Gibraltar and Bermuda are often used to help minimise tax. This evidence raises serious questions about Mr Banks’s conduct and consistency of identity.'[12]

Banks started out selling vacuum cleaner appliances door to door in Basingstoke in the late 1980s. “I was quite good at persuading people to buy things they didn’t want to buy,” he told the New Statesman in October 2016. [19]

Banks eventually moved into a junior position in the Lloyds' insurance market, where he gained his first exposure to the industry. Banks spent seven years at Lloyds', working his way into a junior underwriting position before he moved to Bristol, following a split from his first wife.

openDemocracy found a number of ‘cracks in Banks’ biography’ from this point on. Banks claimed he led his own sales team at Norwich Union – now part of Aviva, but Aviva said they have no record of Banks ever having worked for Norwich Union. Banks also claimed to have worked for Warren Buffett, but checks made by Buffett’s office drew a blank.

The Australian solicitor Jim Gannon and the accountant Paul Chase-Gardener are both described as long-term business partners of Banks.[20]

Better for the Country Ltd donations to pro-Brexit campaign groups:

Donations to the Conservative Party: