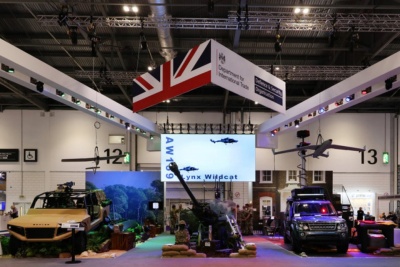 The Defence and Security Organisation (DSO) is a part of the UK government. It helps the arms and security industries promote and sell their military wares and services around the globe.

Previously DSO was housed under the UKTI unit, but was moved into the new Department for International Trade in 2016.

International trade secretary Liam Fox, who in 2011 was forced to resign as a Conservative defence minister over allegations of impropriety, is tasked with personally leading on helping the defence and security industries to export their products.

In late 2017 new figures obtained through freedom of information requests revealed that half of the 30 employees seconded to the Department for International Trade since it was first set up in July 2016 had strong links to the defence industry.

They included three secondees each from Britain’s biggest arms company BAE Systems and aero-engine maker Rolls-Royce. European missile-maker MBDA provided another two secondees, and the helicopter manufacturer Leonardo, the engineering firm Babcock and the US arms companies Lockheed Martin and Raytheon have provided one each.[1]

DSO has a staff of 105 in London as well as 20 people in diplomatic posts worldwide and 27 military staff in its Export Support Team. [2]