Sir David Omand GCB was appointed in 2002 to the post of UK Security and Intelligence Co-ordinator, which controls the overall direction on behalf of the PM of the national counter-terrorism strategy and 'building national resilience' (“homeland security”).[1] He was the Government’s chief crisis manager for civil contingencies. [2] 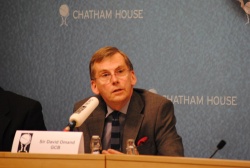 In his role as Security and Intelligence Co-ordinator, Omand was responsible for creating and managing the UK's CONTEST strategy prior to its implementation.[3]

He worked in the Ministry of Defence from 1970 to 1985, and has been Deputy Secretary for Policy, Under Secretary in charge of the defence programme, and Principal Private Secretary to the Secretary of State (1981-82) serving in that capacity during the Falklands War. In 1985 he moved to Brussels, working on loan to the Diplomatic Service as the Defence Counsellor to the UK Delegation to NATO. He was particularly concerned in MOD with the reshaping of the long term equipment programme of British nuclear deterrence policy at the end of the Cold War. He served for seven years on the UK’s Joint Intelligence Committee (JIC) and gave evidence to the Scott Inquiry on August 27 — a John Scarlett 07/07/03 note to Omand directly relates to Andrew Gilligan's contact with David Kelly. [4]

In 2003, Omand was involved in selecting "C", the head of the Secret Intelligence Service.[6]

He retired in April 2005. He is a regular speaker on security and intelligence and on the 'ethical dimension of leadership'.