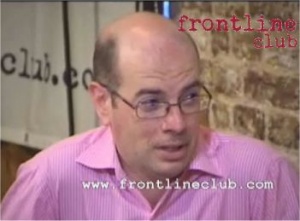 Andrew Gilligan is a British journalist who became known for reporting that questioned the motive for the war against Iraq in 2003, that is, the weapons of mass destruction. For some years Gilligan worked for the BBC and reported from Baghdad. Upon returning to the UK he obtained information from the British weapons inspector which cast doubt on the Iraqi weapons inspector; Gilligan's report directly contradicted Tony Blair's statement at the House of Parliament that Iraq had chemical weapons ready to be used in "45 minutes". The full weight of the British propaganda system was unleashed to sack Gilligan and to re-orient the BBC to be compliant with the war aims in Iraq. On both counts Alastair Campbell was successful; Gilligan was sacked and the top men at the BBC also resigned. Gilligan was hired several months later by the Spectator, where he spent two years. He then joined the Evening Standard, where in 2007 he initiated a campaign against Ken Livingstone, the mayor of London, the pet hate of the owners and editors at the Evening Standard. [1]

Gilligan is currently a senior reporter for the Sunday Times.