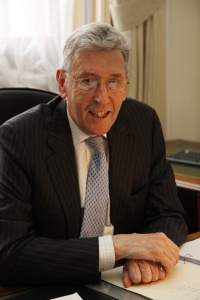 David Howell, Lord Howell of Guildford, is a British Conservative peer. He previously served as Secretary of State for Energy and then for Transport under Prime Minister Margaret Thatcher, and more recently as a Minister of State in the UK's Foreign and Commonwealth Office.[1]

Howell held the following ministerial posts while in the Commons:

Howell served in the Northern Ireland Office as an Under-Secretary of State from 26 March 1972 to 5 November 1972 and thereafter as a Minister of State until 8 January 1974.[3]

In May 2014 Howell penned an article in the Journal of Energy Security which called for a change of direction in the UK government's overly enthusiastic and 'misleading' push for shale gas exploration as the cure for the UK's future energy needs.

This prognosis, he wrote, had come as a result of speaking to a wide range of officials and practitioners in fracking who had attended the Brookings-Doha energy conference in Qatar, and a separate weekend gathering of the Windsor Energy Group (which he chairs), held in April at Windsor Castle.

I think it safe to say that these two events between them gathered just about all the expertise in the planet on shale oil and gas and fracking issues. Qatar in particular was attended by a whole cadre of American officials and practitioners in fracking and they have some important messages for us.

The first of these is that the whole process in the USA has taken years to mature... Second, the 2005 price per trillion cubic feet (tcf) of natural gas was $11 and by 2012 was $1.99. This has stopped much investment in its tracks and means that most of the drilling enterprises in America are losing money.

...Third, the Americans point out that the shale boom could only happen when it did so fast because the country has a vast and available infrastructure already in place to support and supply the demand for drilling rigs and machinery, because America had a ready-built and massive gas grid to get the stuff into the main trunk gas pipelines, and lots of open-road heavy transport facilities. The UK lacks these so far. Of course America, almost uniquely, also has asystem of subterranean rights and royalties accruing to the property owner – a huge incentive in most states.

Fourth, where these incentives do not operate the Americans argue that it is a waste of time and money trying to engage with and bribe rural communities that do not want it.

...Fifth, and in general, the expert consensus from these folk warns that in the UK, in their view, it could all take longer to get going than some have implied, despite the promising gas formations and geology. And it will be a struggle to keep costs down to commercial rates. Any drop in the OIL price below $80 (which incidentally quite a few experts predict) could make new shale operations here, or elsewhere, uneconomic and therefore fail to attract investors.

Howell said all this had led him to draw the following conclusions:

1. The view coming out from Ministers is MUCH too optimistic and could prove extremely dangerously politically when the reality unfolds. The American experience, which was anyway full of problems and delays before it finally took off, cannot be repeated in the totally different conditions here.

2. Huge extra infrastructure spending is needed in the UK to make it all work on any significant scale – and lots of highly controversial legislation to be passed. Thousands of rigs will be needed and America has those thousands. We have, as yet, only a handful.

3. Spending time and money trying to bribe and cajole rural communities is a complete waste, as well as putting backs up and losing rural votes on a major scale. Villages and their environs where homes are worth a million will be unimpressed by £100k offers, and by assurances that ‘only’ two years of heavy truck traffic will disturb them. Those who have visited sites in America will also know that even after installation, the thump of compressors can be sensed up to two miles away, as well as the whiff of diesel from the compressor pump engines.

4. This is not an argument against doing everything to get commercial fracking started, but it IS an argument against starting in the wrong places and with misleading statements about timing and effect. Trying to start in Southern England, and in the Home counties, or in rural and countryside areas anywhere, north or south, is a guarantee of longer delays, higher costs and increased hostility from both green left and countryside right. Every time Ministers open their mouths to claim that fracking must start everywhere around Britain, and not just in carefully selected and remote (derelict) areas, they lose thousands of Tory votes. In the north east, the north west and all the places where the Industrial revolution has left the worst historical scars they do have just such areas, they have the gas and they have the local wish to see fracking investment - to upgrade old coal mining areas, for example.

5.The claims that off-shore coal gasification may well be cheaper than on-shore fracking, and certainly far less controversial environmentally, should be carefully examined.

Based on a lot of evidence and advice from all over, I view what is coming from the Cabinet Office, from Ministers and from DECC about shale gas and oil as being seriously flawed, needing correction and costing us dearly as this becomes evident, which it will. A different tone and form of opinion leadership is needed if fracking is to go ahead successfully.

I dearly want to see economically viable shale gas and oil production go ahead as soon as possible in Britain, but we are going about the task the wrong way. A change of direction is urgently required. [4]

When asked by the Wall Street Journal about his interests, Howell said he has an unpaid role on the economic advisory group to the British Chambers of Commerce and didn't comment on the Kuwait relationship.[5]