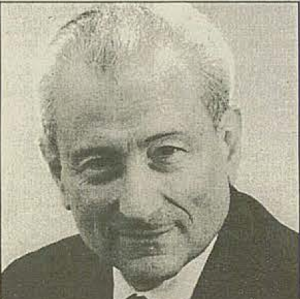 David Bar-Ilan during the period that he was spokesperson for Israeli Prime Minster Benjamin Netanyahu - 1996-1999.

David Bar-Illan (born February 7 1930; died November 4 2003) was chief spokesman for the Israeli government under Prime Minister Benjamin Netanyahu (1996-99). He was also a concert pianist, journalist, editor and critic[1] In 1984 he was director of the Second International Conference on Terrorism, run by the Jonathan Institute in Washington DC.

'Born to second-generation immigrants in Haifa', the Guardian reported that 'at 17 Bar-Ilan won a piano scholarship at the Juilliard School of Fine Arts in New York. In 1948, he interrupted his studies to fight in the Israeli war of independence, then graduated in 1950 and spent nearly four decades in the US.'[2]

A New York Times obituary notes that Bar-Ilan was 'After graduating from the Juilliard School of Music in 1950, he was a soloist with orchestras in Europe, the United States, Latin America and elsewhere.'[1]

In the U.S., Bar-Ilan 'pursued a career in journalism, writing for publications in the U.S., Europe and Israel, including The Wall Street Journal, Newsweek, Saturday Review, Commentary and the London Daily Telegraph.'[3] During 1985-86, he hosted "International Dateline," a weekly public affairs program on U.S. cable networks. [3] In 1984 Bar-Ilan collaborated with Benjamin Netanyahu on the Second International Conference on Terrorism under the auspices of the Jonathan Institute. Bar-Ilan as the conference director, worked closely with the conference 'Chairman' Lord Chalfont.

By the 1980s, he had become a regular contributor to American newspapers, and was a vocal advocate for Soviet Jews. But he despaired of "living in an ivory tower" while Israelis were "struggling for the survival of a nation", and, in 1987, returned home with his wife Beverly. [2]

He then 'became publisher and editor of the Tel Aviv Hebrew weekly, La-Inyan and directed the Jonathan Institute'. [3] AP reported at the time that 'Publisher Rupert Murdoch is the principal investor' in the paper.[4]

Bar-Ilan's involvement with the Jerusalem Post consolidated the rightwing course set by Conrad Black, who bought the previously liberal paper in 1989. Though he was proud of giving space to Jewish liberals - and to the occasional Palestinian journalist - even friends conceded the acerbic tone of Bar-Ilan's own pen. He described Israel's so-called new historians as "Stalinist, anti-western heirs of the Soviet encyclopedists".
The Israeli left regarded him as a reactionary who substituted presentation for substance, squandered Yitzhak Rabin's peace legacy, hounded post-Zionist "ultra-liberals", and left his country isolated in the world. In contrast, rightwingers applauded him for prophesying Yasser Arafat's "true intentions", especially after the onset of the 2000 intifada. [2]

'He became widely known for his weekly column 'Eye on the Media,' in which he was a harsh critic of United States news outlets' coverage of Israel and the Middle East.’ [1] He went on to serve as Netanyahu's chief spokesman (1996-99), and 'in that role emerged as a tough and sometimes acerbic advocate of Israeli policies.'[1] Described as the 'ideological purist in the inner circle around Mr Netanyahu' in 1996, by the Independent, Bar-Ilan, was said to have 'extreme right-wing views'.[5]

In 2001 Bar-Ilan joined other conservatives (including Ehud Olmert, Natan Sharansky , Dore Gold, the United Nations ambassador under Mr. Netanyahu; Tom Rose, publisher of The Jerusalem Post; and Jackie Mason, the American comedian) as a founder of One Jerusalem.[6]

Bar-Ilan is taken as inspiration by a number of conservative and pro-settler interests. For example the Annual David Bar-Ilan Media Conference is hosted by Ariel University Center an institution actually built on occupied land in the West Bank.[7]

In the US CAMERA in 2012, the conservative pro-Israel media monitoring group announced two awards 'in memory of the late David Bar-Ilan, recognizing outstanding student leadership and activism on behalf of Israel on campuses.'[8]