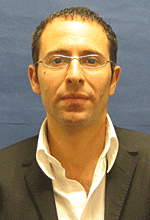 Daniel Levy is a former adviser to Ehud Barak (elected prime minister of Israel in 1999). (Not to be confused with the Daniel Levy at the New School of Psychology at IDC Herzliya)

As a Senior Fellow at the New America Foundation and The Century Foundation, he directs their respective Middle East Peace policy initiatives. A staunch proponent of Israeli withdrawal from the Occupied Palestinian Territories, he served as an official negotiator and as lead Israeli drafter of the informal Geneva Initiative peace plan[1]. He is the son of New Labour fund-raiser Michael Levy.

In an important article published in the Israeli daily Haaretz in 2006, Levy became one of the most prominent names to endorse the thesis presented by John Mearsheimer and Stephen Walt on the influence of the Israel Lobby over US foreign policy.[2][3] Levy has since signed on to J Street, a lobby group that aims to counter the American Israel Public Affairs Committee's (AIPAC) influence over US Congress.[4]

A few days after Tony Blair's appointment as the Quartet's Middle East peace envoy -- an appointment deemed inappropriate by many because of his role in the Iraq war and forestalling ceasefire during Israel's abortive invasion of Lebanon in 2006 -- it was revealed that Levy would join him as a secretary.