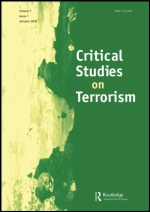 Critical Studies on Terrorism (ISSN 1753-9153) is an academic journal. Critical terrorism studies is 'understood as a research orientation that is willing to challenge dominant knowledge and understandings of terrorism, is sensitive to the politics of labelling in the terrorism field, is transparent about its own values and political standpoints, adheres to a set of responsible research ethics, and is committed to a broadly defined notion of emancipation'. [1]

The journal was set up in 2008. It is published three times a year and hopes to encourage research on terrorism-related topics. It aims to engage in and encourage debate on disciplinary issues such as the politics of defining the terrorism subject and the ethics of responsibility towards the ‘terrorist other’.

The journal is published by Routledge Publishers.

Critical Studies on Terrorism is an international, peer-reviewed, interdisciplinary journal. The journal seeks to publish quality research on all aspects of terrorism, counter-terrorism and state terror. It aims to create space for robust, innovative research on terrorism and political violence, and encourages fruitful intellectual engagement between critical and orthodox accounts of terrorism, discussing a wide variety of topics such as political science, security studies, international relations, conflict resolution and development studies. [2]