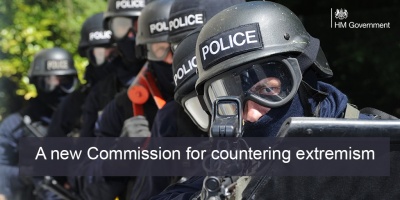 The use by the Home Office of this picture of heavily armoured and masked police pointing weapons to announce the new commission was criticised as 'Orwellian' by the Guardian newspaper. [1]

The Commission for Countering Extremism is a legal body set up by the British Conservative government in 2018 'to stamp out extremist ideology in all its forms'.

It is tasked with identifying and challenging extremism, advising ministers on new policies and promoting 'pluralistic British values'.

In January 2018 home secretary Amber Rudd announced she had appointed women's rights campaigner Sara Khan of Inspire to lead the commission, prompting strong criticism from politicians such as Baroness Warsi and Labour MP Naz Shah as well as Muslim groups. [2]

Sara has unfortunately been a strong advocate of the government’s policy of disengagement, a policy which many, including members of the police and intelligence services, consider has damaged the important battle to engage Britain’s Muslim communities. For the commissioner to be effective the person had to be an independent thinker, both connected to and respected by a cross-section of British Muslims. Sara is sadly seen by many as simply a creation of and mouthpiece for the Home Office.”[3]

A letter petition to the Home Office signed by 100 Muslim organisations and scholars the following day called for Khan to be immediately removed from her new role. It was, said the letter a "deeply flawed and inappropriate" appointment. [4] It stated that Khan has 'no grassroots credibility within the Muslim community' and lacked the necessary academic background and serious practical experience for the role. Khan, said the letter, also 'has lacked transparency over the years with 'conflict of interests' arising between her organisation, Inspire, and public bodies.' Petition signatories included the grassroots organisation MEND, which was criticised previously by Khan, and the Muslim Council of Britain. [5]

Founders of the Muslim Women’s Collective, Bushra Wasty and Sulekha Hassan, argued in the Guardian that 'the choice [of Khan] calls to question the government’s overall approach. Is it one that encompasses the far right, which has increasingly inspired violent attacks? Or does it intend to heavy-handedly single out Muslims, which would reinforce the feeling of a community under constant scrutiny?' Like Baroness Warsi, Wasty and Hassan emphasised how Khan's longstanding support for and links to the government's Prevent strategy was a key issue which 'has made it especially important that she builds bridges with other Muslims'. [6]

Writer Siema Iqbal argued that Khan's overt support for the UK's Prevent policy should disqualify her from leading the new commission. She wrote: 'As a woman I would normally celebrate the success of another woman, regardless of faith or colour. However, this time I do not. This time I am offended. I am offended that a Muslim woman has been used to send the message that the government's controversial counter-terrorism policy, Prevent, will remain, because by choosing someone so in favour of it with hardly any links to the community it becomes clear where the weight of this commission will lie. [7]

In a Guardian op-ed entitled 'as anti-extremism chief, I hear my critics – but I’ll listen to victims too' Khan argued that 'doing nothing is no longer an option'. Her first task 'will be to carry out a comprehensive study of the scale, influence and reach of extremism in Britain'. [11]