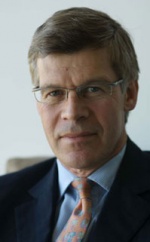 Dr Cento Gavril Veljanovski (born 19 February 1953) is a neoliberal economist and business consultant closely affiliated with the seminal free market think-tank the Institute of Economic Affairs as well as the European Policy Forum. He has authored a number of reports arguing for the privitisation and deregulation of the British media, as well as public utilities like gas and telecommunications.

Veljanovski was born in Australia [1] on 19 February 1953, the son of Gavril Veljanovski and Margaret née Wagenaar. He studied a degree and a masters in economics at Monash University (in 1975 and 1977 respectively[2]) and a PhD at Oxford. [3] He was a junior resident fellow at Wolfson College, Oxford from 1978 to 1984 during which time he was also a visiting professor at the Univiversity of Toronto (1980-1981). In 1984 he joined University College London (UCL) as a lecturer. [4]

Veljanovski was as an advisor to the Peacock Committee, which was set up by the Thatcher government to review the financing of the BBC. [5] The committee, which sat during 1985/6 was chaired by the economist Alan Peacock, who was a Trustee of the Institute of Economic Affairs.

In 1987, Veljanovski left UCL to join the Institute of Economic Affairs (IEA), where he was research and editorial director until 1991. [6] Veljanovski replaced the IEA's first editorial director Arthur Seldon, who was appointed to the post in June 1959 and along with Ralph Harris was one of the two major figures behind the organisation.

Veljanovski's major contribution to the moves to privitise and/or deregulate British broadcasting during this period was a book he edited for IEA called Freedom in Broadcasting. Published in 1989, Freedom in Broadcasting (which also happened to be the title of Rupert Murdoch's notorious MacTaggart Lecture that same year) included contributions from some of the major figures pushing for neoliberal reform of broadcasting including Samuel Brittan and Alan Peacock. [7]

Whilst at IEA, Veljanovski also acted as a consultant for and director at a number of corporations. In 1990 he was reported to be a director of the consultancy firm Putnam, Hayes and Bartlett. [8] He was also reportedly employed as a consultant to the BBC. [9] This was despite the fact that he was ideologically committed to abolishing public service broadcasting. That year he also joined the 'economic consultancy' corporation Lexecon, where he was a director until 1994.

In 1991 Veljanovski authored a report called 'The Media in Britain Today', published by Rupert Murdoch's News International. The report, which also included a foreword by Alan Peacock argued that, 'where there are 50 or more television channels, many with small audiences, the fact that a newspaper proprietor has a controlling interest in several satellite channels does not pose a real threat to diversity or to competition'. [10] Marketing magazine commented that, 'given that News International is sponsoring the report, its credibility may prove to be extremely limited in some quarters.' [11] The Times (also owned by Murdoch) commented that: 'Although his views are similar to those advocated by News International in its campaign to fight off further restrictions on ownership in more than one medium, Dr Veljanovski says he had a free brief when writing the book.' [12] The newspaper quoted Veljanovski as saying, 'I would not have put my name to anything that did not reflect my views of the industry. I don't think I have come up with conclusions comfortable to anyone.' [13]

Veljanovski has reportedly worked as a consultant to Foxtel, [14] an Australian pay television company part owned by News International.

Life after the IEA

Veljanovski left the IEA in 1991 (although he remains an IEA Fellow). From 1991 to 1994 he was an economic advisor to the Republic of Macedonia. [15] According to Euromoney, 'Veljanovski convinced Jacques Attali, president of the European Bank for Reconstruction and Development, to provide Macedonia with urgently needed technical assistance for a privatisation programme', [16] which he then helped draw up. [17] The new privatisation law was, according to Euromoney, 'central to the crisis programme' and 'concentrated on the 1,450 key [socially-owned] enterprises at the core of the economy'. [18] The article continued:

Except for a few strategic industries, there will be no legal distinction between local and foreign investors. Miljovski [the Minister overseeing the programme] sees this as a way of countering potentially dangerous nationalistic policies, while Veljanovski shrugs off critics on the far left who are wary of opening the floodgates to foreign control: "It's not a case of ripping off Macedonia. The whole issue is that only foreign ownership will bring in new capital, new links to financial institutions, new know-how and management skills," he says. [19]

Euromoney reported that Veljanovski 'sees the speedy introduction of foreign banks as imperative to the realisation of his privatisation plans.' [20] In another article Euromoney reported that, 'When Veljanovski asked whether the Macedonian people feared foreign capital would exploit the country, he was told: "Come and exploit us. It can't be worse than what we have now!"' [21] As with elsewhere in the former Soviet Union, the privatisation process was highly corrupt and economic power simply passed to the old industrial managers with support from the state. Looking back on the privatisation process, the academic and one time Macedonian finance minister Trajko Slaveski wrote:

The method for privatisation of medium-sized and large enterprises that has been most favoured by the Privitisation Agency is a variant of a managment buyout... The managers of enterprises saw these developments as a sign that they could do whatever they wanted because the government had made a political decision that they were the "chosen" future owners. The press reported many abuses of the involuntary transfer of shares from workers to managers for a nominal price, even free, under threats, open or tacit, of firing those who opposed the "offer one cannot refuse." It is enough to mention that all of this has been happening in the country with the highest unemployment rate in Europe. [22]

In 1993 Veljanovski joined the board of the cable television programmer Flextech where he was a non-executive director until 1995. [23] Flextech, which was then Britain's second largest Pay-TV provider, started life as an oil services company. It first moved into media in 1989 when it purchased a stake in the cable television broadcaster The Children's Channel during a restructuring of the company. Another shareholder in The Children's Channel was the US cable TV company TeleCommunications Inc, which in December 1993 bought a 60 per cent stake in Flextech and put the company in control of its UK cable channels. [24] (After Veljanovski's departure Flextech entered into a 50 per cent joint venture with BBC Worldwide called UKTV. Eventually Flextech was merged with Telewest and then Virgin Media.)

In 1996 Veljanovski founded the 'competition consultancy' Case Associates. That year Veljanovski authored a report for the European Media Forum arguing that Channel 4 should be privatised. According to the Daily Mail, Veljanovski argued in the report that, 'full privatisation of Channel 4 would bring in $3billion, while a sell-off with the stipulation that it must keep its remit to cater for minority interests would still raise $2billion. [25]