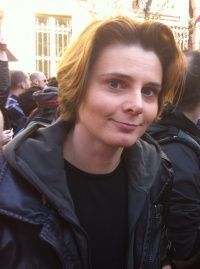 Caroline Fourest (born September 19 1975 in Aix-en-Provence) is a French 'feminist' writer, journalist, editor of the magazine "Prochoix," and author of Frère Tariq (Brother Tariq), an attack on the works of the Islamic intellectual Tariq Ramadan, published by the neoconservative publishing house Encounter Books.

A graduate in sociology and political science, as a journalist she has written many books on such topics as the conservative right, the pro-life movement (France and USA), and on current fundamentalist trends in Abrahamic religions (Jewish, Christian, and Muslim). She served as President of the Gay and Lesbian Center ("Centre Gai et Lesbien"), beginning in 1999.

In March 2006, she signed MANIFESTO: Together facing the new totalitarianism, a manifesto against Islamic Totalitarianism that gained wide publicity and for which she and the other 11 signatories, including Salman Rushdie, Ibn Warraq, Maryam Namazie, Taslima Nasreen, and Ayaan Hirsi Ali received death threats [1].

She has received several awards for her work, including the National award of "Laïcité" in 2005, and the "Award of the political book" in 2006.