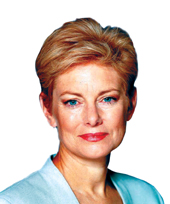 Bronwyn Curtis is Managing Editor, Bloomberg Television and Head of European Broadcast for Bloomberg LP and a columnist for Bloomberg News on global economic and financial issues. Previously Curtis was the Chief Economist with Nomura International and before that the Global Head of Foreign Exchange and Fixed Income Strategy at Deutsche Bank. She has also worked at Mars Confectionery and for the World Bank and UNCTAD on projects in Africa and Asia.

Curtis is a class conscious member of the corporate elite. She is an advocate of the Gordon Gecko school of capitalism which holds that 'greed is good'. Interviewed on BBC Radio Four by Diane Coyle, (another journalist and neoliberal ideologue), Curtis stated:

Nothing wrong with greed - it does motivate people. You see, you know, often big changes because people really are driven by this.

What you don’t want is another Enron but, you know, that should never have happened in the first place if all the players had been doing their job.

The problem of Enron for Curtis is that it might lead to calls to regulate business:

I think it’s inevitable that the pendulum will swing too far the other way. There will be a mass of regulation which will come in and which will try to dampen it down so that they can’t make decisions - and I think that is a problem. I really think you have to be careful not to do that.[1]

She warmed to her theme:

Fear and greed are the two things that drive people, corporations, in financial markets. You know that you are paid by the profits you make. You also know that you will probably lose your job if you don’t make money in a year. And, you could almost describe each year as a nine month contract with your employer - so that if you haven’t made money in the first nine months then your chances of having a job are probably very slim, you know, after the year is over. So, people are frightened not to make money,

Often the people who are attracted to the financial business will be those that really do want to make a lot of money. But you have to have people like that - you’re handling huge amounts of money, you can’t be frightened to make decisions - you have to be a risk taker to work in that sort of environment. And usually people who are risk takers, they’re the same people who go and, you know, bet on the horses. The biggest spread-betters in terms of, you know, whether it’s on football, whether it’s on the FTSE are the people who work in the financial markets themselves.

To simply say that the driving force of capitalism is greed, I think, is a terrible over-simplification. There’s a great difference between self-interest and greed. Greed, avarice, is something really which, you know, I find I recoil from. But there are very good reasons why people may be self-interested in terms of, first of all, looking after themselves and their families and their wider responsibilities - I don’t think that’s the same as greed.