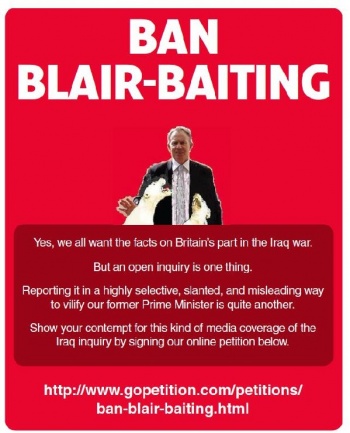 The full page advertisement taken out by Stan Rosenthal in the 1 February 2010 edition of the New Statesman.

Ban Blair-Baiting is a campaigning website set up to deflect criticism of the former British Prime Minister Tony Blair for alleged war crimes. The website lists John Rentoul, chief political commentator for the Independent on Sunday and biographer of Tony Blair, as its spokesman, and Stan Rosenthal, a retired civil servant, [1] as its coordinator. [2] The website was created on 10 February 2010 and is registered to Stan Rosenthal. [3] It has set up an online petition, taken out a full page advertisement in the New Statesman and has issued complaints to the BBC alleging bias against Tony Blair.

The campaign set up an online petition complaining that:

Parts of the media, the anti-Iraq war lobby and some families of soldiers killed in the war are already calling for this to be a TRIAL of Tony Blair with a view to gathering as much evidence as possible to send him to The Hague for "war crimes". Except that unlike a normal trial, Tony Blair has been presumed guilty in advance. [4]

A complaint by the Ban Blair-Baiting Campaign led to an official reprimand for BBC present Jeremy Paxman. Paxman had written an article for the Guardian in November 2010 as part of the paper’s ‘The 10 photographs of the decade’ series. In the article Paxman referred to ‘the initial lies that took us to war’. [6] The BBC’s Director of News, Helen Boaden, replied to Stan Rosenthal stating that, ‘we do not know the truth about what lies may or may not have been told, we cannot attribute such a motive to Tony Blair’s government and making such an unequivocal statement gives a partial impression.’ She said she would ‘remind [Paxman] of the need to appear impartial at all times while retaining his much admired and valued iconoclastic style’ [7] The text of the letter as published on John Rentoul’s blog is below.

Thank you for your email of January 26th, pursuing your complaint about Jeremy Paxman’s article in The Guardian on November 13th. I am sorry that you were not happy with the previous responses and I hope to be better able to address your concerns by looking at each of your specific criticisms.

First of all, though, I think it is important to stress that the feature needs to be reviewed in the context of Jeremy Paxman’s broadcasting style on Newsnight, which – as the Stage 1 response rightly emphasised – is “challenging and engaging”. The test has to be whether what he wrote would be acceptable if he said the same things on air.

For the most part, I think the answer is “yes”. Taking the quotes that you have highlighted, I think it is true to say that the war hangs over the decade like a “bad smell” in that even now the decision to go to war is highly divisive. I think it is fair to refer to images of “poor David Kelly leaving the House of Commons before he killed himself”; and “grinning American guards posing with their hooded, humiliated prisoners.” These things happened. That the dossier was “dodgy” is fair shorthand to describe a document which alleged that Iraq had Weapons of Mass Destruction, claims for which the Iraq Survey Group subsequently concluded there was no evidence.

When Jeremy Paxman wrote that the “truth of the war” is that “the most powerful nation on earth had destroyed a fly-blown tyranny” and had disguised the fact by replacing the American flag with the Iraqi flag after the statue of Saddam Hussein was toppled, that’s a reasonable statement of the balance of forces involved, and of what happened when the statue was toppled live on TV.

In my view, the final paragraph which you highlight in its entirety is also unproblematic: “We shall probably forget the Iraq war in much the same way as we have forgotten the humiliation in Mesopotamia in the first world war. But it ought to make us a lot more wary about everything we see and hear when powerful states decide to pursue ‘vital interests’”. The first sentence is an historical prediction – that what seems controversial at the time may not seem so a hundred years from now. The last sentence is a reasonable observation that the government’s reasons for going to war – the threat of WMD – were not supported by any evidence discovered afterwards. As Jeremy Paxman writes, “the cost wasn’t measured just in blood and treasure but in our ability ever again to trust governments”.

However, there are two aspects of your complaint which I do wish to uphold. I do not think it was appropriate for the article to refer to “the initial lies that took us to war”. Given that we do not know the truth about what lies may or may not have been told, we cannot attribute such a motive to Tony Blair’s government and making such an unequivocal statement gives a partial impression. It should indeed have been phrased differently.

Tonally, I also agree with you that it sounds somewhat sneering to refer to “little George Bush” and I don’t think that Jeremy Paxman would have said that on air. I think the references to “Tony Blair’s striding around with his new best friend” and “the excruciating ‘ball crushing jeans’” are borderline in terms of tone.

Indeed, had he asked for approval for this article, we would have asked him to change some elements. I shall be drawing his attention to my view of aspects of this article and will remind him of the need to appear impartial at all times while retaining his much admired and valued iconoclastic style. I shall also remind him of the need to seek approval from the Head of Department before publication of such articles.

Thank you for drawing this piece to my attention and I’m sorry that it fell short to the extent that it did. That said, presenters’ impartiality must be judged by what they broadcast and publish on BBC platforms and I am very confident that Jeremy Paxman’s presentation of Newsnight meets the BBC’s high editorial standards. I hope I have addressed your concerns but if you would like to pursue any aspect of your complaint to the final stage of the BBC’s complaints process, I confirm that it is now open to you to ask the BBC Trust to take it on appeal.