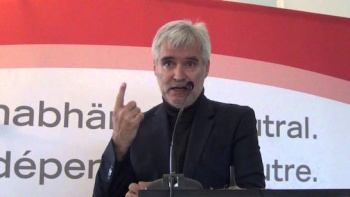 Arnaud Dotezac is a professor of business law at the Ecole Hôtelière de Lausanne, a hospitality college in Switzerland.[1][2]

In 2007 he listed his employer as 'HES-SO', the Haute école spécialisée de Suisse occidentale[3] He lists his past employment as follows: directeur juridique at IP groupe, legal and administrative manager at Chocolat Poulain,[4] a French chocolate brand which was taken over by Cadbury Schweppes in 1988.[5]

Dotezac attended the October 2007 CounterJihad Brussels Conference organised by CounterJihad Europa and the June 2007 The Collapse of Europe Conference in California under the auspices of the American Freedom Alliance and the Council for Democracy and Tolerance.[6]. At the former he met Pamela Geller and according to her account 'What was most interesting in our conversation was his description of structure of various laws. Wherein in other religious and secular law morality comes first and then the law. Just the opposite was true with Islamic law. Law comes before morality.'[7]

On 29 November 2009 Dotezac spoke at a meeting organised by the Conservative right party, the Swiss People's Party (Schweizerische Volkspartei in German, Union Démocratique du Centre in French) on 'Islamization' and the referendum on minarets. Also on the platform was David Vaucher, president of the Swiss movement against Islamization (MOSCI). According to a news report posted on RSR.ch 'both reached the same conclusion: the Islamization of Western society is a reality that must not be obscured'.[8]

Dotezac advocates the use of the 'precautionary principle' against Muslim preachers who fail to recognise the superiority of the civil law, but can't be connected to specific crimes.

If you don’t, based on the freedom to practice your religion freely, you won’t be banned to continue to propagate such a doctrine but you will have to bare the full responsibility for any side effect and to contribute to a special fund (like the oil companies) set up to finance any damages caused as a result of those side effects or meant to prevent them. The burden of proof will be reversed and it will be your liability to prove that based on the due steps you have taken, this could never happened from your activity, speech or mere influence.”[9]

On Facebook, Dotezac is a 'fan' of ultra-Conservative Daniel Pipes' Middle East Forum and of Ayaan Hirsi Ali, as well as STOP THE BOMB[10] STOP THE BOMB says that it is 'a non-partisan coalition in Austria and Germany pushing for sanctions against the Iranian regime, and committed to supporting the secular and democratic opposition in Iran.'[11]