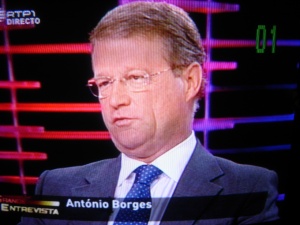 In June 2008, Antonio Borges was appointed Chairman of the Hedge Fund Standards Board at the European Corporate Governance Institute. Formerly, he was Vice Chairman of Goldman Sachs International which he joined in September 2000. His responsibilities included investment banking, leadership development and strategy. Prior to this, he was Dean of INSEAD, a graduate business school based in Fontainebleau, near Paris, between 1993 and 2000. He joined INSEAD's faculty in 1980 and also taught at the University of Lisbon, Portuguese Catholic University and Stanford University. Between 1990 and 1993 Antonio Borges was Vice Governor of Banco de Portugal, where he took a leading role in the liberalisation of Portugal's financial system. He also worked at European level on the project of Economic and Monetary Union.

He graduated from the Technical University in Lisbon and holds his MA and PhD in Economics from Stanford University. He has been a consultant to the US Electric Power Research Institute, US Treasury Department, OECD and the Portuguese government. He was a board member of Citibank Portugal, Petrogal-Petroleos de Portugal, Vista Alegre Group, Paribas, Sonae and Cimpor-Cimentos de Portugal. He is currently on the Boards of Jerónimo Martins and Sonae.com and is a member of the Supervisory Board of CNP Assurances. He chairs the Audit Committees of Banco Santander Portugal and Banco Santander de Negocios Portugal. He is on the Advisory Boards of several European and US corporations and foundations and is Chairman of the European Corporate Governance Institute. He is a member of the European Corporate Governance Forum set up by the European Commission to examine best practices in Member States with a view to enhancing the convergence of national corporate governance codes and providing advice to the Commission.[1]

Borges is also an Administrator of the Champalimaud Foundation and a member of the Centre for European Reform.

While it trumpets its global credentials, INSEAD's American connections are manifold. The driving force behind its creation in 1959 was Georges F. Doriot, a Harvard Business School professor of French origin. A statue of Doriot in the INSEAD library is accompanied by his observation: "Without action, the world would still be an idea." A Ford Foundation grant supported the development of the school and later sponsored doctoral training at Harvard for faculty members, and Harvard donated books to help set up INSEAD's library. "Harvard's influence is very much present, as we have faculty with Harvard roots," says Borges. "I am Stanford-trained, so I have my roots there also. Almost all of our faculty are drawn from American Ph.D. programs."[2]

Borges has also been a speaker at events organized by the European Ideas Network (EIN), a think-tank associated with the European Parliament.[3]

In 1999, Borges, together with John Major, was appointed chairman of a European Advisory Council at Emerson Electric Co., St. Louis, Mo. The council was formed to assist Emerson on issues relating to the company's European business and the changing European business environment. Other members of the council include and Sir Robert Horton, chairman of Railtrack Group PLC and a director of Emerson.[4]