Andrew Harrison is a former UK senior civil servant who is now director of global healthcare at Hanover Communications.

Harrison spent a number of years at the UK Department of Health as a media spokesperson and deputy head of the civil service team taking the Health Act 1999 through Parliament. In this role he helped then secretary of state for health Alan Milburn to push through many of the privatisation reforms that the Conservative's have accelerated.[1]

Harrison joined Hanover Communications in 2002 as a director and in 2013 was appointed director of global healthcare. He also has experience running a global and UK pharmaceutical PR and advocacy programme at another consultancy.[2]

Whilst at Hanover, Harrison has worked with clients including the American Pharmaceutical Group, HEART UK, Lilly and UCB.[3] 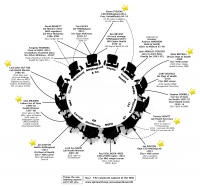 Between 1999 and 2003 Harrison was one of the then secretary of state for health Alan Milburn's aides, with Simon Stevens and Tony Sampson. In 2004 Stevens moved to America and spent a decade working for UnitedHealth eventually becoming vice president of the UH Group, he then moved back to the UK in 2014 as the CEO of the NHS and is the man currently in charge of the health service. In 2005 Sampson was UnitedHealth's chief lobbyist in the UK and Harrison's current employers, Hanover Communications, have 'lobbied for UnitedHealth since at least 2007'.[1]

In early 2015 UnitedHealth were bidding on a number of NHS privatised contracts.[4]