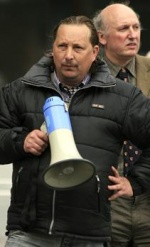 In 2007 the English nationalist campaigner Stephen Gash teamed up with Gravers, and also become a leading figure in the group. In 2010 Gravers became a signatory to the incorporation of the Freedom Defense Initiative which was founded as a non-profit by Pamela Geller and Robert Spencer. In February of that same year Anders was also a speaker at a conference sponsored by the Freedom Defense Initiative at the Conservative Political Action Conference in Washington, DC, entitled: "Jihad: The Political Third Rail -- What They Are Not Telling You."[1] In June 2010 Gravers gave a speech at a Stop The Islamization of America rally entitled "No Mosque at Ground Zero"organized to denounce the Cordoba House initiative.

According to Gravers, SIAD was founded by a group of dissident activists from Den Danske Forening in June 2005.[2]

rather quickly we experienced that The Danish Society didn’t want to act in any way. All they wanted was only to talk internally about the islam problems and publish a well informed magazine four times a year.

But our group up north in Jutland were aware of that we had to do something now if we would have any chance to safe Denmark from the Islamic invasion. We new that it was five minutes to twelve. Therefore we decided to start an organisation whose aim was to wake up the danes through actions and provocations, of course within the limits of the law. All in all to put the government in the devils dilemma, that means, no matter what they did, SIAD would have a win-and-win situation. If they allowed our demonstrations, there would be serious trouble, and if they wouldn’t allow us to demonstrate, SIAD had proved that the freedom of speech and the right to gather in public was suppressed and eliminated.[3]

Gravers spoke at the UK and Scandinavia Counterjihad Summit organized by the Center for Vigilant Freedom in April 2007. In his speech he announced the formation of a pan-European group, Stop Islamisation of Europe:

I want to thank Baron Bodissey and also the 910 group, first of all for mentioning SIAD on their blogs and for your great support! But also for your encouraging of sending mails to our minister of justice. We have found out that we have almost the same ideas as the 910 group, so we match very well!

In cooperation with No Sharia in England, we agreed to try to expand the ideas of SIAD to the rest of Europe through the umbrella organisation Stop the islamisation of Europe SIOE. I would very much like to share SIOE with 910 group, but we will get into these things later tonight.[4]

Gravers reportedly planned to host an exhibition of cartoons of the prophet Mohammed that had been displayed at an event in Texas held by Pamela Geller's American Freedom Defense Initiative - outside which two armed men, believed to have been attempting to assassinate organisers, were killed by police.[6] As well as Danish capital Copenhagen, he claimed in right wing news site Breitbart in late June that plans were afoot to show the images in London, Paris and Madrid.[7]. However, following difficulties finding venues willing to host such events, as of late August 2015, none of these had occurred.

On his Facebook page Gravers posts links to a number of right-wing and Zionist groups. He is a ‘fan’ of the Middle East Media Research Institute, the Jewish Internet Defense Force, United Against Nuclear Iran and the Young Gun Conservative Network. He is also a 'fan' of English Democrats Party leader Robin Tilbrook and friends with the Dutch Islamophobic politician Geert Wilders. [8] Gravers is a principal member of the Freedom Defense Initiative.