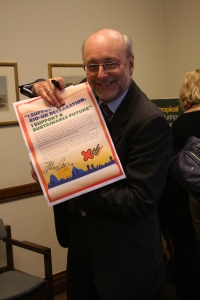 Alongside his parliamentary role, Cunningham is also a member of the One North East regional development agency board and a non-executive director of the North Tees and Hartlepool NHS Foundation Trust. [3]

He was a member of the education committee, and parliamentary private secretary to the former shadow justice secretary Sadiq Khan. [4]

A journalist by profession, Cunningham worked in newspapers and radio before entering in to a career in communications and public relations namely as head of communications for Transco the gas pipeline company.

When Cunningham entered politics he first served as the north eastern chairman of the Museums, Libraries and Archives Council from 2002 to 2008. He was also very active in the Stockton North Constituency Labour Party, as their press officer from 1984–2010, vice chairman and secretary between 1985 and 1995 as well as being its chairman from 1995 to 2000. [4]

In 2013, Cunningham said on the government's support of fracking:

'They have not proved the case yet for fracking in the UK, particularly in close proximity to where people live and while it may be an industrial area, Teesside is pretty compact. We need to make sure that the impact on the environment and on the water table is tried and tested before we allow anything to go ahead.' [5]

Cunningham's constituency includes one oil and gas licence block, awarded to Third Energy by the Oil and Gas Authority under the 14th licensing round in 2015. There are no plans or applications currently underway. [6]

Cunningham has an inconsistent voting record on fracking. [7]