Sir Sherard Cowper-Coles is a former British diplomat, who has served as ambassador in Saudi Arabia and Afghanistan.

After leaving the UK Foreign Office, Cowper-Coles joined arms contractor BAE Systems in 2011 as business development director of its international operating group. He left in 2013.

Cowper-Coles was appointed a non-executive director of HSBC Bank Egypt on 1 October 2014. [1] He is now group head of government affairs, HSBC Holdings plc. 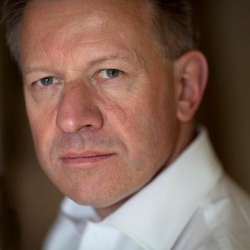 Cowper-Coles joined the Foreign Office as a desk officer in the Republic of Ireland Department in 1977.[2] He was Third Secretary and later Second Secretary in Cairo, 1980–1983, First Secretary in the Planning Staff of the Foreign and Commonwealth Office, 1983–1985; Private Secretary to the Permanent Under-secretary of State, 1985–1987, First Secretary in Washington, 1987–1991, Assistant in the Security Policy Department of the FCO, 1991–1993, Resident Associate, International Institute for Strategic Studies, 1993–1994; Head of the Hong Kong Department of the FCO, 1994–1997, Political Counsellor in Paris, 1997–1999; Principal Private Secretary to Robin Cook, the Secretary of State for Foreign and Commonwealth Affairs, 1999–2001.

His first role as a head of mission was in Tel Aviv as the British Ambassador to Israel from 2001 to 2003. He was next appointed Ambassador to Saudi Arabia in Riyadh, a post that he held until 2006. From May 2007 until 2011 he served as ambassador to Afghanistan in Kabul.

ACOBA said, "given that it has been 4 years since he had any involvement with BAE Systems as HM Ambassador to Riyadh, and that the appointment will be 4 months since his last day of service, the appointment was approved subject to the condition that, for 2 years from his last day of service, he should not become personally involved in lobbying UK Government Ministers or Crown servants, including Special Advisers, on behalf of his new employer".[5]

The Serious Fraud Office (SFO) had dropped its investigation of BAE Systems, the contractor for Britain’s allegedly corrupt £43 billion arms deal with Saudi Arabia, in December 2006, after intense diplomatic pressure from the Saudis. BAE was fined by US authorities in 2010 after it admitted a relatively minor charge of making false statements but had faced no action in Britain over the Saudi allegations, and until 2011 the full details of the case were kept secret. A US cable given to the WikiLeaks website and obtained by The Daily Telegraph disclosed such details in 2011.

The report revealed that the SFO had evidence that BAE had paid £73 million to a Saudi prince who had 'influence' over the Al-Yamamah defence contract and that there were 'reasonable grounds' to believe another 'very senior Saudi official' received payments. Moreover, BAE had allegedly circumvented anti-bribery laws by making 'substantial payments' to overseas agents employed by the Saudi government.

Cowper-Coles' appointment at BAE caused controversy when it was revealed he had 'had a profound effect', as the British ambassador to Saudi Arabia, on the decision by Robert Wardle, then director of the UK's SFO, to end this investigation in 2006. Apparently, Wardle had ended the investigation because of a threat that the Saudis would stop providing 'intelligence on al-Qaeda'. Ms Garlick then deputy director of the OECD’s working group on bribery, said three key meetings between Mr Wardle and Sir Sherard 'had a profound effect on his views'.[6]

Indeed, I remember way back in the late 1970s - when I was Middle East correspondent for The Times - how a British diplomat in Cairo tried to persuade me to fire my local "stringer", an Egyptian Coptic woman who also worked as a correspondent for the Associated Press and who provided a competent coverage of the country when I was in Beirut. "She isn't much good," he said, and suggested I hire a young Englishwoman whom he knew and who - so I later heard - had close contacts in the Foreign Office.

I refused this spooky proposal. Indeed, I told The Times that I thought it was outrageous that a British diplomat should have tried to engineer the sacking of our part-timer in Cairo. The Times's foreign editor agreed.

But it just shows what diplomats can get up to.

And the name of that young British diplomat in Cairo back in the late 1970s? Why, Sherard Cowper-Coles, of course.[7]